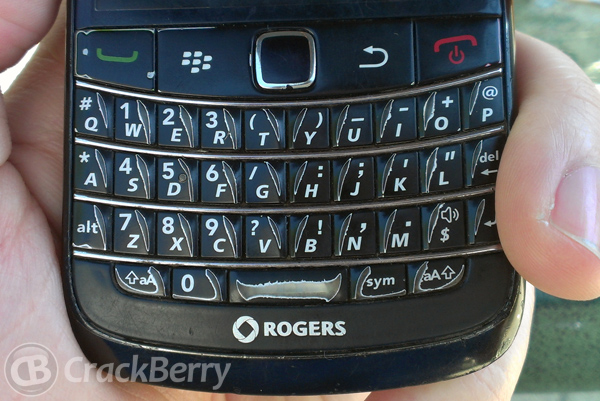 Rewind nine months and I posted a CrackBerry Habits poll asking if you talked on your BlackBerry via a wired headset. That poll was inspired my friend Vinny, who's not so much a tech guy but is absolutely a hardcore user of his BlackBerry. When it came to his wired headset, he'd talk on his phone non-stop, even while out for breakfast with a group of people. It was BlackBerry abuse, not use (see video).

Fast forward to yesterday. I dropped by Vinny's for an espresso before heading out to watch the Euro 2012 finals. While at Vinny's, he asked me when the new BlackBerrys were coming out as he figured he was *close* to needing a new one. I looked at his BlackBerry Bold 9780 and almost spit my espresso out on the table. He has completely worn out the keyboard on his BlackBerry. Literally. On every single key he has worn through the paint to the clear plastic underneath. And what's really crazy is that the Bold 9780 isn't *that* old. He's maybe had the phone all of 18 months - just halfway through his 3 year contract on Rogers.

i've always considered myself to be a murderer of keyboards, but I've never worn through a BlackBerry keyboard like this. Granted, I'm pretty lucky and am always getting my hands on new phones. So I need to know from CrackBerry Nation... how many of you have made the keyboard on your BlackBerry look like this? Sound off in the comments, and if you have photos, send them in to [email protected]!