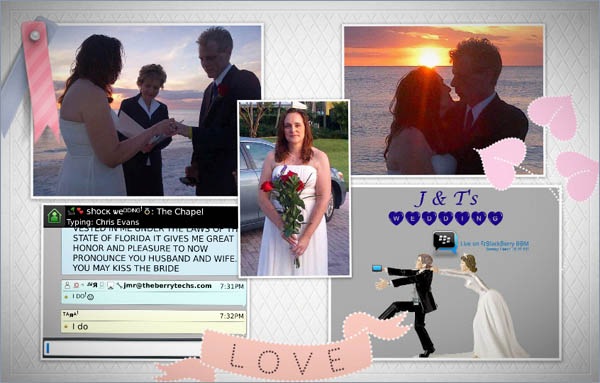 We love nothing more here at CrackBerry than seeing our community grow, and we've seen a lot of friendships start right here in our forums. Heck, Bla1ze and I met through CrackBerry, and we're still together three years later. However, there is another couple that met in the forums, and they not only are still together, but they got married this weekend!

John and Tara met back in 2010 through a BBM group that John started. Tara joined the group, and over time the two realized that they had a lot in common, and they grew closer. Eventually they met, and the rest, as they say, is history. Being BlackBerry addicts, they threw a twist in their wedding: they broadcast the whole thing over a BBM group, so their friends from CrackBerry could be there with them.

Twenty-six of their friends joined the BBM group, sharing the nuptials and pictures via chat. The wedding was lovely, with the happy couple on the beach surrounded by family and friends, both near and far. Is this the first wedding held via BBM? We're not sure, but it's the first we've heard of, and everyone at CrackBerry wishes John and Tara all the best. Congratulations!

Drop into the forums and leave your congratulations for the newlyweds