When I saw Marco van Hylckama Vlieg wearing a BlackBerry PlayBook around his neck in his BlackBerry Rap video submission for CrackBerry Super Fanboy Contest I was INSPIRED. I just knew going to BlackBerry DevCon in San Francisco this year that I had to represent the loyal BlackBerry fans out there with a pimp'n PlayBook necklace of my own.

Turns out it was a great idea, and the PlayBook on a gold chain at DevCon got a ton of attention. Since debuting it on the blogs, I've been getting a bunch of requests from CrackBerry readers asking for the details on how I built my version. My motto is to give people what they want, so here it is... the Do It Yourself instructions so you can build your own pimp'n BlackBerry PlayBook necklace. Watch the video above and keep reading for written instructions.

How to Build Your Own BlackBerry PlayBook Necklace

Step 1: Buy Your Stuff:  Once you have the dermaShot case in hand (we have them on sale right now at ShopCrackBerry.com), take your PlayBook and case to Home Depot. I found a helpful employee there in the hardware department who cut the chain for me and helped me with finding the appropriate screws and washers (I was in a rush so didn't have time to waste). The guy thought I was a bit nuts, but I was literally in and out in ten minutes with all the hardware I needed, plus some two-sided tape. A variety of chains were available at the Home Depot, but I felt the gold colored one was the way to go. Total cost for chain, washers, screws, nuts and two-sided tape was under $20. The dermaShot case normally retails $34.99, but you can often find it for less (as I type this we have it on sale for an ultra-low $9.95 in our main CrackBerry store).

Step 2: Push the screws/bolts through the holes: The nice thing about the dermaShot case is that the rubber material is fairly flexible to manipulate, but it's still strong. The other great part is that the case already has two perfectly positioned holes in it which is where the microphone pickups on the PlayBook are. With this case there was no need to drill any holes. The bolt thread was able to pull through the holes, and the head of the bolt was big enough that it wouldn't pull through the rubber. Tip - for extra protection you may want to add a thin washer on the side of the casing.

Step 4: Put the ending links of the chain over the bolts, secure with washer and nuts: The last step is connecting the chain to the bolts. Once the end links are over the bolts, I put a washer on, and then the nut, to make sure the nut wouldn't pull trough the chain link. I hand tightened the nuts - there's no need to torque theings down too tight (dont' want to the screw head to pull through the rubber).

Step 5: Download the Screamager App from App World: This app was literally made for this purpose. It lets you stream awesome stuff on your PlayBook like a billboard. It's only 99 cents in App World... but seriously, I'd pay 10 x that for it. It's a must-have for a ball'n look like this. Download it here.

Conclusion: That's it. Once you have the materials it's honestly only five minutes or less of work. Get the case on sale and pick up your hardware at Home Depot and the total cost is literally under $30. Or if you're made of money and want to put it on a real gold chain, by all means blow the $$$ and do it up. Just make sure you send in your photos to [email protected] with your own tablet chain creations.

Ball'n BlackBerry Playbooks in the Wild 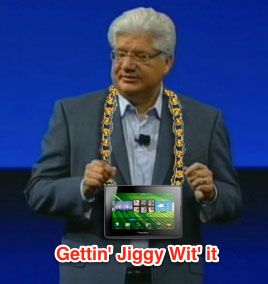 STAY TUNED for our next CrackBerry Do It Yourself where we'll show you how to turn your BBX BlackBerry SuperPhone into the hawtest belt buckle on the planet! :)