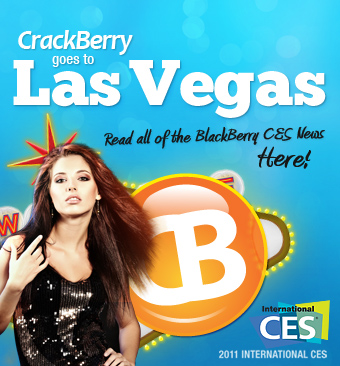 CES -- the biggest consumer electronics tradeshow of the year -- is now upon us and that means you'll want to keep it locked to CrackBerry.com this week for all of the BlackBerry news coming out of the show. As we've done in years gone by, we'll have tons of stories and live video captured from the show floor and if you follow the team on twitter you'll be able to see what's happening between blog posts. Here's the CrackBerry and Smartphone Experts twitter names you'll want to be following this week:

And for the smartphone stuff happening at the show not related to BlackBerry, be sure to check out our sibling sites at AndroidCentral, TiPb, PreCentral, WPCentral and Nokia Experts.

As for what I'm hoping to see at CES, my fingers are crossed that this is the week I'll finally get to hold a BlackBerry PlayBook in my hands. We know it's been on display and accessible at developer events over the past couple months, so hopefully RIM has a bunch of them in Vegas and I'll be able to spend some quality time with it and report back my impressions. Beyond that, I'm sure there'll be a whack load of stuff going on.. so stay tuned and keep it locked to CrackBerry!