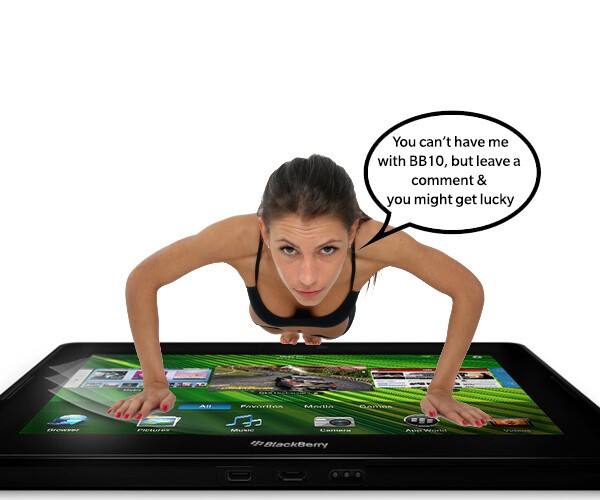 It's been a sh!tty day for CrackBerry Nation. If you're shy on all the details, read this, this, this and watch this and this.

Ok, with bad stuff covered, I want to head into the weekend in a good mood. Or, at least a slightly better mood. Giving away stuff makes me happy... hopefully the chance to win stuff makes you happy... so we're going to have a contest here for good 'ol CrackBerry Nation to try and cheer everybody up.

Since PlayBook owners officially won't be getting BlackBerry 10 for their beloved tablet, and so many of you have already picked up your BB10 phones, we're going to go outside our usual sphere of BlackBerry device prizes on this one.

Instead, if you win this contest, we're going to let you pick your tablet of choice from any that are on the market today. Win this contest and we'll give you an iPad, or iPad Mini, or Nexus 7, or Surface whatever... you want it, you got it. Or if you don't have a BB10 phone yet and want one (or want another), we'll get you one. Heck, maybe we'll give you two (Z10 and a Q10!).  Put it this way... we're giving you an awesome prize of your choosing. Simple as that.

How to enter? Leave a comment saying something POSITIVE!

To enter this contest is easy... LEAVE A COMMENT SAYING SOMETHING NICE. SOMETHING POSITIVE. About BlackBerry. About BlackBerry 10. About BlackBerry people. About CrackBerry. Spread some love. Spread some cheer. Enter as many times as you like, so long as what you say is awesome (anything negative will not be counted as a contest entry and may be deleted at our discretion). We'll let this one run until Midnight PST on July 1st, and announce the winner on July 2nd.