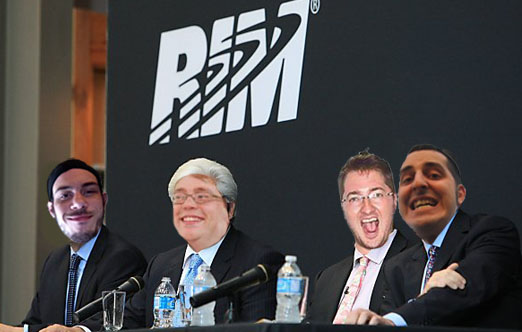 Back on July 28th, just a few days after Research In Motion layed off two thousand employees, I started writing an article titled 10 Things I Would Do Immediately If I Ran Research In Motion. Over a month later, I still haven't finished or published that article. There are a few reasons for that. For one, it felt/appeared like maybe RIM was actually starting to execute on some of the things I was writing into the article (like working on a Tablet 2.0 OS Big Bang Release). Two, I could never quite decide how to address the much discussed Co-CEO management thing. Is it a good structure? Does it need to change? I have a ton of respect for both, but I've heard and read so many stories pointing one way or the other over the years, that I'm not sure what's best on that front. The best I could come up with is switching up to a three CEO structure and hire me for the job (or at least I should run to get elected to the BOD). Seriously, if two CEOs are better than one, wouldn't three CEOs be better than two? And finally, a whack load of BlackBerry 7 Smartphones hit the market, so I got BUSY and the article became lower priority. Besides, it sort of feels like with the BB7 phones being well received, that the RIMPIRE is Striking Back.

What 5 Things Would You Do Right Now if You Ran Research In Motion?

But with an earnings call coming up on September 15th, whether the results are good or bad you just know that the topic of RIM's leadership will be in the news again and a whole lot of stories of RIM should be doing this and RIM isn't doing enough of that are going to surface in the media. So in the spirit of the RIMPIRE Striking Back I thought we could have some fun here and take a proactive approach on the subject and poll CrackBerry Nation for their thoughts. 10 is a big number, so we'll go for 5. Leave a comment to this post letting us know the 5 (or more, or less), things you would do right now if you ran Research In Motion. We'll give it a few days for the comments to fly, and from there I'll go through it all and put together another article highlighting the best suggestions. Have Fun!