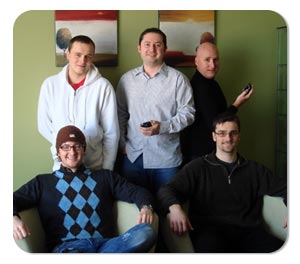 How did CrackBerry.com come to be? How did five guys in Winnipeg come up with the idea and create the best site on the net for BlackBerry users? The answer is simple – addiction.

Kevin Michaluk worked at CanWest Global, one of Canada's big media companies, working in business development for their online division (Canada.com Network). CanWest are proud to be on the cutting edge of technology and Michaluk was given a BlackBerry on the first day of the job. After learning the ins and outs of Old Blue (BlackBerry 7290), the BlackBerry became an integral part of Kevin's life. He used it for an alarm clock, slept with it, took it with him to the bathroom, mastered brick breaker on it, got his typing speed up to 50+ words per minute on it, and used it as a distraction from boring conversations and meetings. You name it, Kevin did it with his BlackBerry.

When he left CanWest to pursue some entrepreneurial endeavors, the good folk at CanWest kindly demanded the BlackBerry back, and that's when Kevin truly discovered just how addicted to his BlackBerry he really was. Giving it up was HARD (rumor has it security had to stop him at the door and pry it out of his hands). Even though there was now less need for a BlackBerry, Michaluk went through serious withdrawal symptoms. Listless, distracted with twitchy thumbs, his girlfriend demanded he get either a new berry or get treatment. Luckily, the new 8700 was just out. Michaluk bought his new BlackBerry and felt much better.

While he felt nervous about getting others hooked, Michaluk convinced two colleagues to try the BlackBerry. Kevin Hill, a journalist and James Falconer, a graphic designer, were both instantly hooked and a small coven of CrackBerry addicts was formed.

Hanging out in back lanes looking for better signal strength and hanging around malls looking for new accessories and devices the three formed a gang they call The Crack Team.

One night while sitting at the local ale house, ignoring each other while peering at their little screens, thumbs-a-tapping, Hill comments that calling BlackBerrys CrackBerrys is so apt given their addiction level. In the ensuing moment, the inspired idea to build a site about it arises and the vision and mission of CrackBerry.com is officially conceived... that is, if there wasn't already a CrackBerry.com, then there NEEDED to be one.

Then the first snag.

The domain name was already owned and squatted on. After some quick research the owner is found. Then snag number two. The owner is not going to give up the name for free. The Crack Team need an investor. A friendly investor comes on board and CrackBerry.com soon becomes the domain of the founding Crack Team.

The team decide to build the site and they bring on a couple of other team members -- the best in the business -- to help get it launched. Tom Kaminski and Remik Szul know their stuff inside out and planning and initial development of the new site gets underway.

In November 2006, Webster’s Dictionary announces that CrackBerry is the 2006 New Word of the Year.  The team feel good about that. The private investor feels even better.  Both Kaminski and Szul are non-CrackBerry users and see the effects of the addiction. But Kaminski is a genius and Remik thinks the rest of the team is insane so the founding members hold off on pushing the CrackBerry on them. At least for a little while.

So here is the site, officially launched in February 2007. It took Michaluk's severe BlackBerry Addiction and entrepreneurial drive to bring the project to life and to get'r done, the graphical talents of Falconer to make the site "perrty", the genius of Kaminski and Szul to get it working correctly, and the linguist skills of Hill to figure out if the plural of BlackBerry is BlackBerrys or BlackBerries (read the debate here! And these days it's "BlackBerry smartphones").

While the site and the team are biased toward the BlackBerry and its addictive qualities, the scope of the site will encompass all of today’s cutting edge smart phones.

The Team are committed to operating the #1 site for CrackBerry Users and Abusers. They’ll be working on the site continuously to bring you the most current news, information, best stories from the mobile industry, etc. etc.

CrackBerry.com - the most trafficked BlackBerry community site on the net: In August, 2007 CrackBerry.com was Acquired by Smartphone Experts! Based out of Inverness, Florida and founded in 2002, Smartphone Experts is a leading online retailer and manufacturer of smartphone accessories, powering a network of e-commerce stores that offer a wide selection of products, rapid fulfillment, and knowledgeable expert support. In 2007, Smartphone Experts was ranked #37 on the Inc 500's list of Fastest Growing Companies.

Still unable to come to terms with his BlackBerry Addiction, Michaluk has continued to focus his efforts on the site's continued growth and operation in his roles as Founder/Community Manager/Editor In Chief and Fearless Leader of CrackBerry Nation. And joining the Smartphone Experts family has allowed the site to grow tremendously as CrackBerry.com is now supported and augmented by a huge team of talented individuals and volunteers (all of whom are smartphone addicts!).