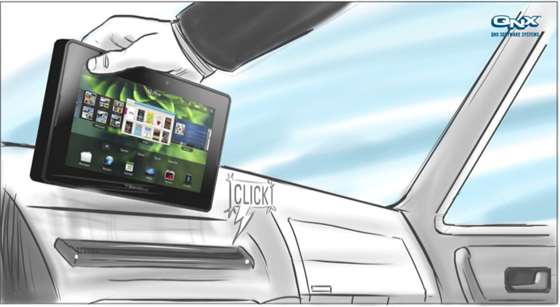 When RIM bought QNX back in April of 2010, many industry pundits suspected that the Java-based BlackBerry OS would die, and QNX would form the basis of a new operating system. This was clearly correct.

But at the time, Mike Lazaridis, a founder of RIM and then co-CEO, sidestepped questions about the future of BlackBerry OS. I remember talking to Jim Balsillie about QNX at BlackBerry World one month after RIM bought them. Instead of Jim answering my question directly, he said, "What did Mike say?" I told him Mike had casually stated that "The car is the ultimate accessory for a BlackBerry". Jim smiled as if to suggest, "good cover".

We're sitting on the cusp of a complete re-write of RIM. The executive team, the software, the hardware, and hopefully the marketing too. And outside of CrackBerry (see Kevin's discussion on the Playbook-powered Porsche), there aren't too many people talking about RIM's opportunity in the vehicle market.

But there is at least one other RIM watcher taking notice. That person is Gus Papageorgiou from Scotia Capital. Not too long ago he put out an interesting research note discussing the potential for RIM to expand its service revenue by connecting cars to the RIM cloud.

His description makes a lot of sense. Forget the traditional BlackBerry. This isn't necessarily about email or any other core functions you'll find on a smartphone. Instead, think about what car manufacturers and customers might want. How about automated notices of service requirements? What about firmware updates to some of the car's electronic systems? Location awareness? The list here is really endless.

RIM's cloud infrastructure can essentially host the equivalent of a BES for cars. And the car itself runs QNX, so it gets treated much like any enterprise BlackBerry connected to a network.

The revenue for RIM would likely come from a monthly service fee. Papageorgiou points out that car companies should be able to bury the present value of the service fees into the sticker price of the car. In fact, on high end cars, this would be a no brainer.

There are a lot of cars out there. And practically none of them are "smart" yet. So this is an obvious market waiting to be served by someone. Why not RIM. They have the experience with the NOC and they have the connections into car companies with QNX.

Not that this necessarily matters, but Thorsten Heins is German. There are 5 very successful German car brands - Porsche, Audi, Mercedes, BMW and Volkswagen. It would be nice to see Thorsten embed RIM's services into the heart of the German car industry.

There has to be another billion dollars of service revenue (quarterly) waiting to be had here. I think RIM probably is targeting this market. But there is really no point in them going hog-wild talking about it quite yet. It's probably still a bit early days, and nobody will give them much credit for it. Better for them to silently execute a major deal and then start talking.

Separately, and probably a topic for another day ... I would really like to see RIM bring some QNX love to the airline industry. Get rid of those disgusting excuses for in-flight entertainment systems (at least the ones on Air Canada). They're powered by an embedded Microsoft OS and they crash more often than a child driving a bumper car.