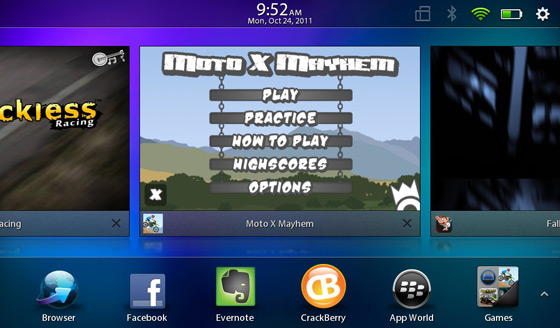 I've been wanting to write on this topic for a while now, and I think having attended DevCon this past week makes it a ripe opportunity. So here goes …

BlackBerry Gaming Today: RIM has done a pretty good job proving that QNX can absolutely scream when it comes to gaming. It's right up there with the iPad2. And now that gaming SDKs such as Marmalade and Unity bake in full support for the Playbook (and BBX in the future), there is going to be no shortage of kick-ass games in BlackBerry App World.

But as it stands right now, companies like Apple are still way ahead of RIM when it comes to gaming. I think the Playbook has a form factor advantage, and I suppose you could argue that a direct HDMI connection supports 1080p video, which is extremely high quality. However that's about where the benefits end today.

Apple has Airplay. iPhone or iPad games can all be directly transmitted to a $99 Apple TV box, which then connects to a big screen via HDMI. It's a beautiful solution. And it looks like things are only improving with iOS. Check out this demo below from Real Racing 2 (you can read more about Party Play on TiPb here).

So what can RIM do today?

Today you can hook a Playbook to a TV using an HDMI cable. And you can also do multiplayer gaming for games that support it. But unless the game itself renders a multi-player output, you can't display more than one player's perspective on the screen.

And so I see a ton of things that RIM should be doing to add an awesome layer of innovation to the gaming marketplace. All of these new potential features should give the company a way to step up the power of BBX. Given how much focus they had on gaming at the Devcon keynote this year, I think they need to do this stuff. Quite frankly, if they don't they'll just look lame.

For those unfamiliar, DLNA stands for "Digital Living Network Alliance". In plain English, DLNA certified equipment rides on top of your existing home network. It works with wired Ethernet and Wi-Fi. But we'll focus on Wi-Fi because for gamers this is what matters. RIM should be supporting DLNA within BBX. Game developers wouldn't even need to do anything different. RIM would simply need to create a DLNA media server app within BBX that outputs the game to a large TV without the need for an HDMI cable. This would be RIM's answer to Airplay, but without a $99 separate Apple TV type of box required.

But it can go a lot further. Imagine if one BBX device is the host of a game (the master device), while other BBX devices can use something like BlackBerry Bridge to connect into the master. Then a bunch of friends could play any multiplayer game without all of them needing to own a copy. The master device would initiate the multiplayer game, and the guests would use their BBX superphones as remote controls. The master device would also function as the DLNA media server, streaming the video output to the TV.

RIM is all about open standards. DLNA is an open standard whereas Airplay is proprietary. This means that Apple is unlikely to ever support direct output to an HDTV unless that TV happens to be manufactured by Apple. A bunch of buddies who all have iPhones or iPads will still need a $99 Apple TV box in order to share the content on a TV.

This puts RIM in an interesting position. They could conceivably take a leadership position in mobile gaming. That said, I'm not holding my breath for it. It's more like a dream. And I say this as an investor rather than as a consumer … because I'm a busy dad with 2 kids. I don't really have time for games. But I pay respect to the millions of hardcore gamers who live and breathe this stuff.

Competitively, Android also supports DLNA today. There are third party apps that can let you serve your content out to your TV. So RIM is really racing against Android if you ask me.

Back in April this year, Mike Lazaridis and Alan Panezic were at the Playbook media briefings in New York. Ronen from BerryReview reported that Lazaridis told him DLNA support was coming and Kevin was told the same thing by Panezic during his briefing by Alan. Yet here we are more than 5 months after the launch, and RIM has not certified the Playbook with the DLNA. Maybe it's coming with Playbook 2.0? We can only hope.

Open standards always seem to move faster than closed standards, so I think it's smart that RIM is embracing them. HTML5, WebGL, C++, and hopefully DLNA soon enough.

What do you think?

How do you feel about the potential future of multi-player gaming on BBX where you don't need a set top box, and not every player needs to own a copy of the game? What else would you like to see RIM do? Perhaps they can add support for game rentals to App World?

Tell us what you think? What else can RIM do to bring some awesome innovative features to BBX?