Did you get a new BlackBerry for the holidays? Not sure just where to start? Not to worry, we're here to help. 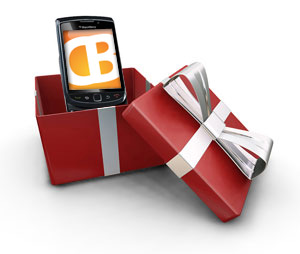 The Holidays have been very nice for us here at the CrackBerry team. Based on what I've seen on Facebook, Twitter, and Google+, it's been a nice Holiday season for many of you, too. We've seen lots of updates and Tweets about people receiving both BlackBerry Smartphones and BlackBerry PlayBooks. Now that you've got your brand-new BlackBerry device, you're going to want to learn how to use it. As our Fearless Leader Kevin said on our last CrackBerry Podcast, BlackBerry is for smart people. Smart people read CrackBerry, and we've got you covered.

At CrackBerry.com, we keep you up-to-date with the latest in applications, devices, accessories, and how-to guides about our favorite smartphone. This year, BlackBerry released its 7" tablet; in February, the PlayBook is scheduled to become more awesomer with the addition of on-device email, calendar, and other enhancements.

You're already familiar with BlackBerry's unsurpassed ability to communicate - Research In Motion mastered mobile email and security a decade ago - but what else can your BlackBerry do for you? We've put together our best app recommendations, how-to guides and all around BlackBerry goodness for your viewing pleasure.

Getting Started with your new BlackBerry Smartphone and BlackBerry PlayBook

CrackBerry.com has a long history of providing quality help and tutorials. Today is no different. Whether you want to figure out how to install apps, remove themes, or make your BlackBerry into cooler tool than it already is, we've got a variety of guides to give you hand

Now that you know how to use your new BlackBerry, you'll want to add some cool applications. There are thousands of apps to choose from - some better than others - in a variety of categories. We listed some of our favorite apps below. This is just a small sampling of what BlackBerry App World has to offer.

Last year, we recommended Pandora for your listening pleasure; this year, we do the same. If you're not familiar, Pandora builds music stations based on what you like. After installing and setup, just enter the name of a favorite song, artist, or classical composer and Pandora will create a radio station just for you. Instead of just giving you songs by a particular artist, Pandora makes use of the Music Genome Project to recommend music to you based on the music you already like. Don't like a song? Just click the thumbs-down button, and Pandora will never play that song again.

Slacker Radio for BlackBerry works much in the same way as Pandora. Some users prefer it due to it's station caching and other options. Slacker offers premium services to remove ads and provide more features as well. Simply search a song or artist and Slacker will create a custom station on the fly. Never run out of music again with Slacker by your side.

While BlackBerry Messenger is still the holy grail of messaging applications, it is limited to communicating only with other BlackBerry users. In the unlikely event that not all of your friends and contacts have a BlackBerry, Whatsapp is an excellent cross-platform messaging application. Doing the math, text messaging can cost over a dollar a kilobyte in charges. Whatsapp uses your phone's Wi-Fi, Edge, or 3G data plan to text and send pictures and video.

Keeping up with your phone

Though it may not be there yet, your BlackBerry Smartphone will soon contain links to the majority of your life. Email accounts, personal pictures, Twitter and Facebook accounts, and still more will all be linked to your phone. If that information is lost or stolen, what would you do? Not to worry though; BlackBerry Protect can help you keep all of that information secure.

Logging in to the Protect website, you'll have options to get the GPS location of your phone, lock, and even wipe the data on your device. Phone missing in your house? That actually happens to me a lot. BlackBerry Protect can make your phone ring loudly even if it's on silent or vibrate.

BeBuzz simply lets you change your LED color for emails, BBM, SMS and phone calls. It comes in extremely handy if you don't like to have audible alerts on your device. Set blue for BBM, green for email, pink for SMS -- whatever your heart desires. It is totally customizable and includes support for a slew of third party apps. The latest and greatest version of BeBuzz allows you to set custom LED alerts for individual contacts, toasts - on-screen popup messages, and a text-to-speech subscription service.

A naked BlackBerry is a wondrous sight to behold. All of its curves and lines and stylings are clearly visible, and buttons and ports are easily accessible. Yet, without a case, your BlackBerry is just a gravity-related incident away from a true disaster. A friend of mine dropped her (non-BlackBerry) Smartphone less than a week after getting it. Now, it's literally held together with Scotch tape. Don't let that happen to you.

Whether your phone was purchased at retail price or through a wireless carriers discount phone + plan bundle, a BlackBerry is an costly piece of technology. The Laws of Gravity aside, keys; doorways; and small children conspire to turn your beautiful new BlackBerry into a rather expensive paperweight. Whether using a soft or a hard case, any case will offer your BlackBerry some level of protection. Personally, I prefer the harder, more rigid cases. Gravity, as has been proven many times, is my nemesis.

Wires are an annoyance. They get caught on things as you're walking around. They get tangled when stored in a drawer. They frequently aren't long enough. Bluetooth technology allows you freedom from tyranny of wires. BT headsets and earpieces let you move and work around without these problems. BlackBerry plays very nice with BT technology, making pairing a simply and pain-free step. We've reviewed tons of Bluetooth products; you're sure to find one that's right for you.

Sure your new BlackBerry came with a charging cable, but is that all you need? For every BlackBerry I've owned, my very next purchase was a charging pod for it. Instead of plugging in a cable each time you charge your BlackBerry (which way up does it plug in? Oh, yeah that way... no I had it right the first time...), you could just pop the smartphone into a charging pod and be done with it. No trying to figure out which way is up, and each comes with a light on top - so it's easy to find in the dark. With the BlackBerry Smartphone's bedside mode, popping the device into its charging pod turns it into a nightstand clock and quiets your phone for the night.

The presents have been given, the wrapping paper torn; and among the carnage of bows and ribbons, you've found yourself with a new BlackBerry. Congratulations! Welcome to the wonderful world that is BlackBerry. Whether you're new smartphones or BlackBerry in particular, CrackBerry.com has you covered. Now that you're up to speed on some of the best we have to offer, check out the links below for even more.