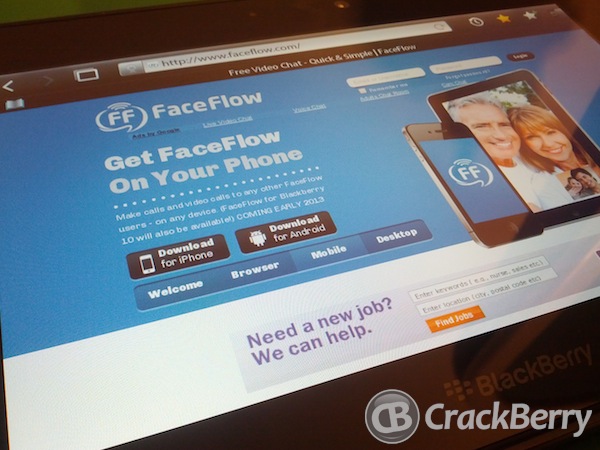 I will admit I haven't used FaceFlow on any other platform before, but if you head on over to their website it clearly says on the homepage that FaceFlow will be coming to BlackBerry 10 in early 2013.

FaceFlow would appear to be not too dissimilar to Skype in the fact that you can instant message, voice chat, video chat and group video chat -- all for free. Already available for Android and iPhone, the application also supports a selection of browsers meaning you can use it at home on your PC/Mac as well as when mobile.

To spice things up I have just tested it from the browser on the BlackBerry PlayBook and it does sort of work but I had some pretty bad feedback and audio issues. That may just have been me and DJ testing it from an non official supported browser but at least with a proper native application that is built for BlackBerry those issues will be fixed.

It's yet another great sign that developers are talking the launch of BlackBerry 10 seriously and as I have stated before I think by the time Q1 comes around the app selection for BB10 will be quite surprising.

If you fancy signing up for FaceFlow now you can do so here.