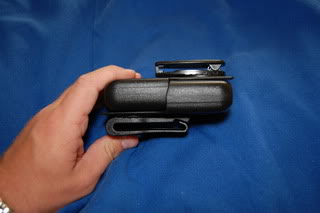 [This review comes to us from the forums courtesy of Guzman. If you have any stories/reviews of your own you can send them along to editorial(at)crackberry.com and they may get posted up on the front page]

Men and Women in Law Enforcement, Public Safety, Fire and Rescue, and the military all know how brutal our line of work can be on items we use daily like sunglasses, watches, and of course our BlackBerry's! I've gone through my fair share of all of the above from nice Bullova watches, Oakley Sunglasses, and even BlackBerry Curves and Pearls alike. But then one day the clouds parted and up from the sea arose a company who's main objective was to stop me from destroying at least one thing I held dear. Enter... OtterBox.

Now I'm going to delve a little bit into why I love and cherrish my OtterBox and why so many of my colleagues have been influenced into leaving their lesser cases for this durable and rugged system. For those who do not know, the OtterBox system incorporates a plastic dust sheild (however I did cut it off around the camera and flash to keep my picture quality from degrading), a hard plastic case, and a rubberized outer skin. Then to top it all off Otterbox throws in a belt-clip holster to sweeten the deal making this one of the most cost effective ways to protect your Berry.

Wether you are squeezing between a very large trailer and a nice brick wall investigating a break in, running between an ambulance and a wreck scene, or even riding a motorcycle and worried about rocks flying up the Defender case manages to handle them all in stride. And just to clear up a few things, those are all scenarios I have personal experience with. And now, when I take my case off of my BlackBerry for whatever reason I am greeted by a BlackBerry that looks brand new.

However the one drawback to this rugged "made for action" case is the clip that only works on certain size belts and the occasional pocket. Based on this, it left me and my coworkers either leaving our phones in our vehicles which defeated the purpose of having a clip, or hanging it on our pants pockets. This was alright until we would get into a foot chase and all of a sudden our phone was laying on the side of the road or in some tall un-cut grass on the side of some run down shack. But thanks to OtterBox that will hopefully be a thing of the past.

OtterBox designed a new Heavy Duty Clip that has a 2" ... well ... clip that allows it to fit securly on a duty belt. The problem with the regular clip is that it would not seat completely over the 2" duty belt as the heavy-duty one does. As you can see in one of the pictures, the slightest upward bump and your BlackBerry is going to a little journey. I have actually almost broken a Storm but dropping it two stories to a tile floor because of a clip that did not properly fit my duty belt. I am exstatic to have a clip that fits.

I will say that the 2" claim does not leave much room for movement as it seams it is literally right at 2". However this could also be seen more as a positive as it will not be moving forward nor backward on the belt. The clip is also just as rugged as the regular clip that comes packaged with the case, and does also feature the magnet to place the phone in sleep mode.

All in all I would recommend this clip to any BlackBerry users using a Defender style case on their BlackBerry. While those of us with active and demanding jobs will realize the full potential of such a accessory, anyone with a belt fetish could also benefit from this accessory as well! So if you want to try one out, just head over to the ShopCrackberry store and search it up!