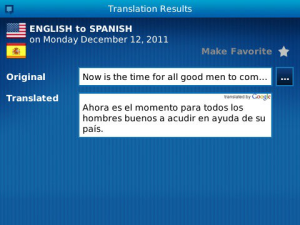 Communilator Pro for Blackberry by RantNetwork incorporates the very best in language translation, voice synthesizers and optical character recognition to bring you “the only translator you will ever need”. Hear speech output of your translated text in a clear, high quality voice with language inflections and expression, not in some hard to understand computer-generated voice. Need to read a foreign journal, magazine, poster or other document? Not a problem, Communilator Pro is capable of recognizing and translating foreign text in 44 languages captured with your BlackBerry camera. Communilator Pro delivers translations in over 3,000 language-pairs; provides High-Quality speech for translations in 20 foreign languages; and offers seamless integration with SMS and email. Continue reading after the jump to see more of what this app can do!