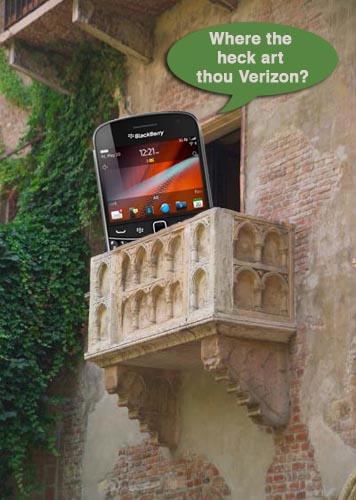 We've seen a lot of disappointed folks this week on Verizon that are concerned that Big Red won't be carrying any of the new BlackBerry 7 smartphones. We don't know the reason why Verizon hasn't announced officially which devices they will carry, but as one of the biggest wireless providers in the US, it seems silly to think they would drop BlackBerry all together. In any case, this tidbit of information posted in the forums today should help squash some of your worries. Christian Remde is a director, and he posted on his personal blog on Tuesday about his latest project, which happens to involve this exact subject. *Edit: Apparently between the time I wrote this and it was published, he edited out the BlackBerry portion of what you see below. Rest assured, it WAS there this morning.*

This week I'm directing for Invodo, an agency here in Austin.  One of their clients is Verizon Wireless and, in particular, I'm directing a web spot for one of Verizon's new Blackberry smart phones that are coming out in the next month or so.  Can't say too much about the actual device as I had to sign some NDA's, but it's a very cool project.


So fear not Verizon subscribers, you won't be left out of the loop when these new devices are released. As far as release dates and prices, well, those remain to be seen. Thanks for posting this in the forums xweb10!

For more information and to discuss in the forums