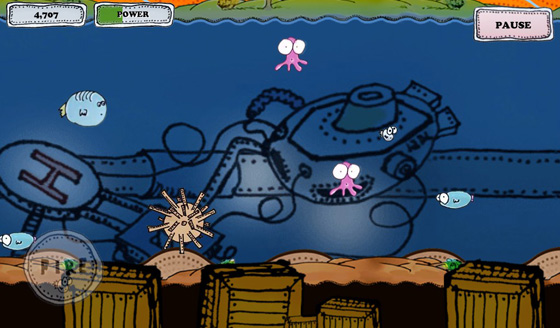 At first, Comb Over Charlie appears to be less than it actually is. The graphics, though beautifully rendered, are simple; looking like they were drawn by Napoleon Dynamite or Demitri Martin. Comb Over Charlie has two controls: float and fire. Sound effects are minimal and perhaps a bit cheesey. The "ouch" sound made by the giant at the end of each level is a good example. Imagine a giant fish making a tiny ouch sound.

It is precisely all of this "cheesiness" - the graphics, the sound effects, and even the music - that make Comb Over Charlie so much fun to play. Comb Over Charlie is not your typical hero. Charlie...well, he has a bit of a hair loss problem and tries to make up for it by sporting a rad combover. The other fish have always made fun of him for it. Now the tables are turned, Charlie is taking matters into his own fins.

The game has only two controls: float and fire. Floating in just the right space is actually rather challenging. As Charlie swims along, you'll need to touch the right side of the screen to make him float. Releasing your finger, Charlie will fall. Using a combination of floating and falling, Charlie must aim and fire his bubbles at the other fish. It's harder than it sounds.

As you play, Charlie can pick up a few power-ups making his bubble-shots double or triple and even a rocket pack for maximum speed. More fun, Charlie's bubbles bounce off of enemies and hit more enemies. Once you've gotten some sweet justice from all those name-calling, dishonoring sea creatures, you'll come across the level bosses. From the three I've managed to reach, they've actually been a bit difficult to beat.

Comb Over Charlie is fun. It's easy enough to play if you need to kill a few minutes' time and challenging enough to make you pick it up even when you don't. My one and only suggestion is the option to turn off the game's music so I can listen to my music or a podcast while I play. That small complaint aside, Comb Over Charlie is an amusing and challenging game. Its eight levels are sure to keep me entertained for quite a while to come.