We announced a short while ago that Colin McRae Rally was now available for all touch BlackBerry 10 devices and with me being a long term fan of the game I had to put it through its paces and see if it is worthy of its $2.99 price tag.

Colin McRae Rally first hit the scene back in 1998 and I'm pretty sure I remember being addicted to it on the original Play Station. With the game being so old some folk may not think it's a big deal that us BlackBerry users get to play it, but if you ask me it's a positive sign or surely Codemasters wouldn't have made it for us?

As far as I'm concerned the game is an old classic and sits alongside other games that have been around for years but are still popular - such as Sonic the Hedgehog or Super Mario Bros. Anyway, let's take you through the game quickly and see if you share my opinion or not. 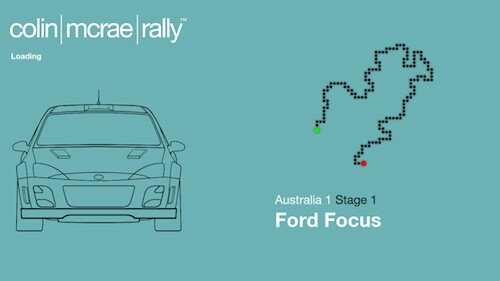 You'll then be presented with the available levels but as you would imagine, to start with there will only be one for you to play as the others need unlocking through winning the first rally.

Then you are given some car options, but like with the levels you will need to earn points to unlock cars. Its just the Ford Focus that is free from the start, but fear not - it does a great job.

Then it's race time. When it comes to controlling your car you have a choice of two options - either tilt or touch. Which one you will prefer will probably come down to testing out both and the same goes for the camera view as there are again two options available. Both of these can be switched at any point in the game just by pressing the pause tab, which will open up the settings.

Taking a look at the on-screen controls - if you are touch mode you will have left/right arrows at the bottom left of the display. Over on the right is your accelerator, brake and handbrake - which comes in handy for those really tight corners. Above these you have a speedometer, although I didn't find it of much use. You don't really have time to take your eyes of the road with this one.

Getting to the end of the stage in the shortest time possible is the aim of the game here. Although you can see the turns coming up in front of you, you will still need to rely on your navigators instructions due to the speed of the race. He will notify you if the next bend is left or right and how steep the bend is. It takes a little bit of getting used to but once you are on the same page as your navigator if almost takes the pressure of looking for the next bend.

The gameplay and graphics with Colin McRae Rally are awesome. Sure, the game has been around for years on other platforms and this BlackBerry 10 version doesn't bring anything new to the table but it is a whole bunch of fun.

The big question is whether the game is worthy of the price tag. My answer to that is a big fat yes! Sure, it won't be everyone's cup of tea but for those of you that like car racing games this one is a real beauty. There are hours and hours of fun to be had here and in my opinion it can be addictive - which is a good thing.

Give it a try and let us know what you think?