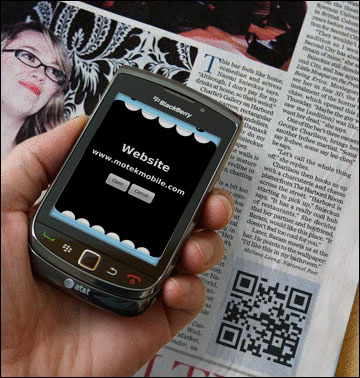 You know, as much as we love our smartphone keyboards, some of us really don't like to type on them any more than we have to. That's one reason why QR codes are becoming more and more popular; ease and speed of use, marginal room for error vs manual input, and versatility. We reviewed some of the available options a few months back, with Joseph comparing four different apps to see what worked and what didn't. This week a new app has appeared in the CrackBerry store, from popular developer motek mobile, called Code Muncher.


Code Muncher scans and reads QR codes in real time by simply pointing the BlackBerry camera at a QR code and taking a picture of it. Upon recognition of a QR code, the application will instantaneously process and decode the image. Users can view web sites, send SMS messages, call phone numbers, and save contact information from QR codes.

Motek mobile has two versions of Code Muncher available: a free, ad supported version and a paid version for just $.99. There are some options built in to the app to customize it, such as different sound effects while scanning and different colors for the little muncher guy. Overall, the app does what it says, and you can't beat free. The only catch is that so far Code Muncher is only available for the BlackBerry Bold 9780 and Torch 9800, BB6.