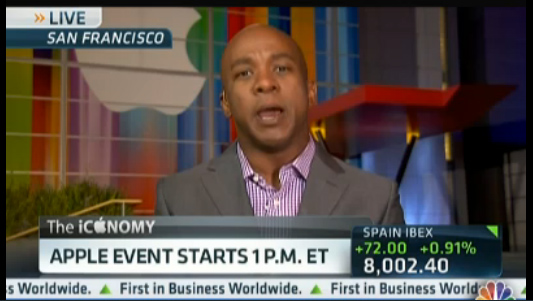 Following up yesterday's fun poll where 100% of CrackBerry Nation voted they couldn't give a rat's behind about the iPhone 5, CNBC reporter Jon Fortt gave us another CrackBerry laugh this morning while hyping up today's Apple announcement. At the end of his interview with host Becky Quick, Becky asked in regards to his on location event coverage today... are you going to be sending all that in via iPhone or BlackBerry?

His answer? BlackBerry. CNBC journalists still use BlackBerry for their internal emails, and they need to send emails fast, where Jon iterated BlackBerry still trumps the iPhone in that regard. Tools before Toys, right? During my recent interview with Research In Motion CMO Frank Boulben, when I asked about the hard time the media in North America has been giving BlackBerry, he pointed out that those same people still rely on BlackBerry to do their jobs effectively every single day. Clips like this are great evidence this is still the case. I have a feeling Jon Fortt will like BlackBerry 10 as much as we do once he gets his hands on it.

You can watch the clip over on CNBC's website. As for today's iPhone 5 event, if you want see what Apple announces, be sure to tune into iMore.com/live for all the coverage. It ramps up at 1pm ET today.