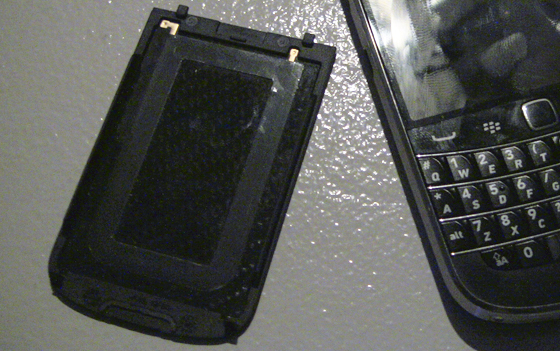 Of the new BlackBerry 7 devices announced to date, the BlackBerry Bold 9900/9930 is the first and only one to offer NFC support. I did ask around at the BlackBerry 7 Fan Night as to why NFC didn't also make an appearance in the Torch 9810, 9850, 9860, and while I didn't get a 100% straight answer, between the partial answers and a closer look at the battery door on the Bold 9900, I feel there's an explanation here.

So when it comes back to the new Torches not having NFC, I think part of the explanation here is simply that to enable NFC you need to ensure the overall hardware design supports it (not just the chipset/software) and that likely the 9810 and 9850/9860 designs were finalized without considertion for this (or it was considered, but the ultimate design they wanted to go with didn't allow for a well-placed NFC antenna and/or thin battery door without doing some structural redesign). You need to be able to get the NFC antenna in a good place where it's going to work. In other words, RIM could have put NFC into the Torch 9850/9860, but it would have meant altering the shape of the device to get it all working 100%, which they didn't want to do with these devices, especially on a device like the 9850/9860 where you can tell design and feel are paramount.

Historically RIM has often rolled out new features (WiFi, GPS, Camera, etc.) only on one device model first, so putting it only on one of the new BB7 devices announced isn't a total surprise. And if they are going to put it on one device first, it makes sense RIM would first introduce it on the BlackBerry Bold. Though we were told all future devices will have NFC. But with NFC really still in its infancy, I don't think it's that big of a deal not to have it on the Torch 9810 or Torch 9850/9860.

What do you all think? It is a huge deal that the new Torches don't have NFC? Or not that big of a deal?? Let us know in the comments. And PS. If you read this post and don't know what NFC is, click here.