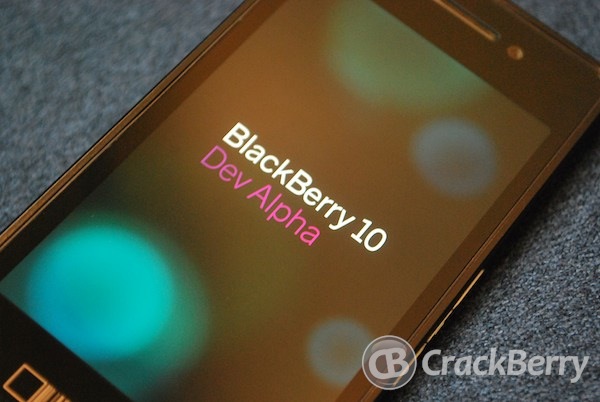 Now that BlackBerry 10 Jam and BlackBerry World 2012 are history, many developers have returned home from sunny Orlando, Florida with a BlackBerry 10 Dev Alpha device in their hands. Some have been quietly working on their apps, some have been digging through the device to see how exactly it all works and some are just adoring their new exclusive phone.

RIM has always made developer devices available to folks though not really in this fashion, so the interest in the device itself is quite high. That said; many folks who have checked the device out found some interesting things hidden beneath the covers. Join me as we take a look at some of the goodies found within.

As noted by RIM on many occasions, the BlackBerry 10 Dev Alpha device comes pretty bare bones. That of course was done intentionally as it is a device designed and issued to encourage developers to create applications. When you load it up, all you get is the camera and a web browser -- nothing more, nothing less -- or so RIM would have you believe.

You see, when you look at the installed applications list there are actually 33 preinstalled apps, meaning RIM intentionally hid the rest from folks much like how they hid some of the stuff on the BlackBerry PlayBook.

As of now, there is no way to make these apps magically appear and become available, though it has been suggested they will be unlocked as OS updates for the BlackBerry 10 Dev Alpha roll out.

Looking to pinpoint some unreleased device names? The BlackBerry 10 Dev Alpha is a great place to start. As pointed out by J. Duke from OSBB, the Dev Alpha has files outlining some of the devices we mentioned previously in our BlackBerry 10 roadmap. Some of the devices have long since fell off the map and have been scrapped but no matter how you look at it, it's interesting that RIM left them in there. Let's have a look at the list:

The most notable devices in this list are the Nevada, Nashville and Naples or, if you like, the "N Series". Yes, it is a series of devices that information suggests are the first batch of QWERTY BlackBerry 10 devices that are now on the list to potentially be released to the masses. Right now, the Nashville and Naples are mystery devices when it comes to overall specs where the Nevada has been noted in the past as being essentially a BlackBerry 10 version of the BlackBerry Bold 9900.

The remaining devices on the list have all been spotted before in one way or another, so there really isn't all that much to say about them aside from the fact that they remain unofficially announced by RIM, though some such as the BlackBerry London and Blackforest (a 10-Inch PlayBook) have been placed in somewhat of limbo status.

The Winchester 2 series is the updated batch of PlayBooks with the 1.5GHz dual core processor, NFC and the noted various options for connectivity such as HSPA+ and LTE. But what about the BlackBerry Colt? That is the BlackBerry 10 Dev Alpha -- simple explanation for that one. So that's all of them, right? Not exactly.

If you dig around the files a little bit further, there are configuration files for all the noted devices above but there are also configuration files for what could potentially be another device in the very early stages of development. The BlackBerry "Rubicon" is noted many times throughout the OS. Could it be another device? Possibly. There isn't enough information there to be certain but it is worth noting considering how many times it pops up.

This one might seem like a no brainer but it needs to be mentioned. System apps, PlayBook apps and yes, even Android apps can all be sideloaded to the BlackBerry Dev Alpha device. Some apps may not look exactly as they should, especially the system apps as they tend to not fit the display properly, but that all can be adjusted when RIM feels like getting around to it and you can be sure everything will look fantastic when it all gets updated using Cascades.

Although there is no way to really make use of the services on the device yet, aside from data, the BlackBerry 10 Dev Alpha does have cellular connectivity built into it. BlackBerry developers residing in the US were actually given AT&T microSIMs to use in the device.

When not connected to WiFi, if you have a microSIM you can transmit data with it. It even shows up as running on AT&T 4G (see: HSPA+) or if you have a SIM from another carrier, the device will work with that as well as it is carrier unlocked. That's not the interesting part though. The AT&T SIM given does NOT seem to have a BlackBerry data plan.

It has a number also. You can call it -- but there is no way to answer the call given the fact the phone UI portion has been removed for now. If you're really desperate to receive phone calls on the device though, you can just use a Bluetooth headset.

Given the fact RIM left the device with pretty much no apps on it, there isn't a great way to view the file structure on the device. That doesn't mean it can't be done, but it does mean they made it rather difficult to do so.

The browser is the gateway that works though, as you can see in the shot above -- you can indeed access the files should you need to. Pictures, videos, music and more can be browsed to on the device and loaded from there. You can of course also install some apps that allow for file structure browsing.

Overall, images are on par with that of the BlackBerry PlayBook, as expected. No telling what RIM will do for cameras when BlackBerry 10 rolls out to the masses but I'd like to think they learned their lesson and will no longer go with any EDoF cameras on any of their devices.

Another section where the PlayBook comes into account. The video quality is certainly on par with that of the PlayBook but just like the camera portion, hopefully RIM will no longer go with an EDoF set for BlackBerry 10. It's just not up to the task and auto focus on the devices is a must-have, especially when even the iPad 3 takes great pics now.

The BlackBerry 10 Dev Alpha is an interesting little device. Although RIM will say it was never meant for mass consumption, it's no secret that this device was being considered for mass production and possible launch into the consumer market at one point or another.

In the end, they had to do something with all the ones they had built and to give them away to developers as a test bed for RIM's next-generation OS was a brilliant idea.

Just remember folks, this device is in no way indicative of what future hardware may look like from RIM but one thing for sure is now that developers have this device in their hands, they're more fired up to work on BlackBerry 10 than ever before, and that's a good thing!