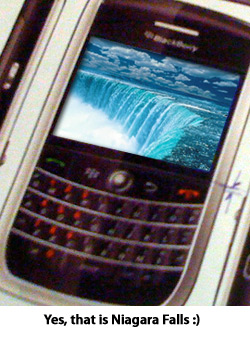 Seems as though there was confusion surrounding the BlackBerry 9000 and it's lack of 3G-ness. Code names were being thrown out, one 'Javelin' and the other of course 'Niagara'. BGR has learned that the Niagara model is the EV-DO device scheduled to hit Verizon in May of 2009. Seems like a long ways away for info leaks to be coming out about it?

At any rate, here are some specs on the Niagara:

Looks like we were right when we first heard the Javelin name, as Kevin & Craig talked about it in the last podcast. Gotta pat Bla1ze on the back for that one. Both of these devices are looking very similar in appearance, but that's nothing new for BlackBerry.

So, are you going to be able to wait 'till May 2009? Or should we get Kevin to score you an advanced test unit!? :) Way to go Kevin on the BlackBerry 9000 purchase!

[ Note from Kevin - Two strange things in the BGR's info here. A) the Resolution - 480 by 360 is sounding odd to me. The 9000 in my hands right now is definitely 480 by 320, so it seems strange that would change on these devices. B) The 3.2 megapixel camera. Will be sweet if that's the case, but again, it at least seems the 9000 I am using right now is at 2MP. Who knows though - maybe the hardware has the capabilities to bump up to 3.2 but the software just isn't supporting it yet. With different processors being rumored I guess anything is game. Cool Info though! ]