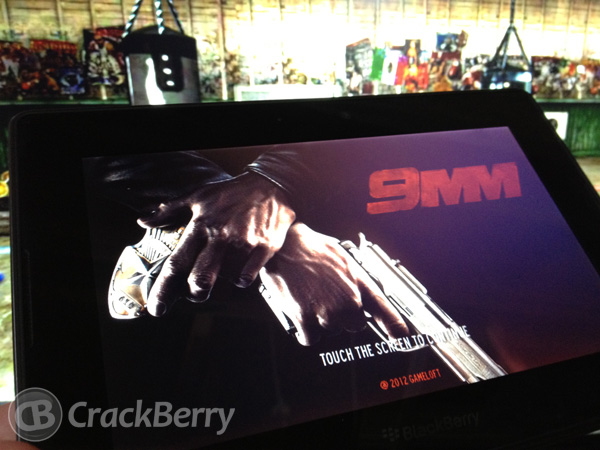 Picture yourself as an inner city cop, but you’re no normal cop, you aren’t afraid to get your hands dirty and bend the laws to get things done your way. Gameloft has launched yet another title on the BlackBerry PlayBook called 9mm HD. In 9mm HD, you play a cop named John "Loose" Kannon, and with a small arsenal of guns attempt to clean up the streets of the drug lords and other city crime. The game features HD quality graphics, superb character acting, and more. Continue reading for the full review of 9mm for the BlackBerry PlayBook.


When we live in a world where mobile gaming is almost becoming more popular than our “old” home based consoles like the Xbox 360 and PlayStation 3, developers continue to push the boundaries. As many may know, Gameloft is no stranger to HD graphics, and of course the BlackBerry PlayBook. So when I saw one of their best selling titles 9mm HD launch on the PlayBook I was excited to dive in. Weighing in at over 800 megabytes, I knew it was going to be a visual feast.
Game features

With Gameloft, you expect HD visuals and high levels of detail, and they don’t disappoint in 9mm HD on the PlayBook. Each world is seemingly crafted with attention to what the player will do and what they will see. As you get out of your car in the first level, you are presented with a full city. It doesn’t matter which way you look, the world is completed with people, cars, trees, and other buildings. While I did notice a few graphical anomalies where a light would flicker, it certainly wasn’t a deal breaker.

There actually isn’t that many variations of controls for touch screen games, and in 9mm HD Gameloft chose to go with the commonly used dual joysticks. Where they provide a differentiation factor for controls is in the location. With the left joystick you don’t have a set location, the joystick is wherever you place your finger. Giving you the option to have the control anywhere allows you to stay committed to the tasks at hand, freeing you from worrying if you’ll place the thumb in the right spot during that heated shootout. The left side of the screen will control where you are looking, and contains no joystick per se. The whole right side becomes a touch area almost like a mouse pad on your laptop computer.

A topic I like to cover in game reviews is the in-game settings that the developer has offered. Within the 9mm HD settings page, you will have access to a few categories like language, controls, sound, advanced settings, and help. With each of the 5 headings you will be presented with a few more options, like adjusting the volume or changing how the controls work inside the game. A setting that some may have wanted to see would have been ‘Gore On/Off’, but I guess you are expected to know what you’re getting yourself into when you read the game description.

If you’re looking for a game where the story alone will keep you playing, look no further as the story in 9mm provides you with just that.

During the gameplay, you will follow a cop named John "Loose" Kannon around the streets of a city in which the gangs and druglords have taken over, but that won't stop John. John is the type of cop that will do what he needs to clean up the streets of his city, and for once in for all reclaim his city. In the game you will be presented with opportunities, but be carful that you, yourself don’t get caught up in the mess.

What I will say is my synopsis doesn’t do the game justice; you’ll just have to download it and give it a whirl on your own.

Yes, you have read correctly, 9mm does indeed feature an online multiplayer over the Gameloft Live system. The online multiplayer will allow you to play against those on the various platforms that the game is available on. It also features two different online modes; one being Free for all, which is a mode where everyone is to fend for themselves, everyone is an enemy and the other is cops ‘n’ gangstas. In the cops ‘n’ gangstas mode, there are two sides and each will need to fight to the end, what side wins is up to the better team. I’m a true believer that adding multiplayer to a game increases its stickiness and adds to the games replay value.

If you’re looking for a game that will push the boundries of any current shooter on the BlackBerry PlayBook, look no further than 9mm HD from Gameloft. With the online multiplayer, stunning HD graphics, and intriguing story line, you are bound to spend countless hours arched over the PlayBook's screen. While during my review I did notice that the game had a few graphical glitches, I wouldn’t put too much weight on this as a negative. But one thing that is a cause for concern is the inability to save game progress, so make sure you play it all or wait for a patch. 9mm HD for the BlackBerry PlayBook is undeniably worth the download and can be found in BlackBerry App World.

While there were a few graphical issues the over all gameplay, graphics, and of course the gore make this game a download worth while. Purchase 9mm HD for the BlackBerry PlayBook