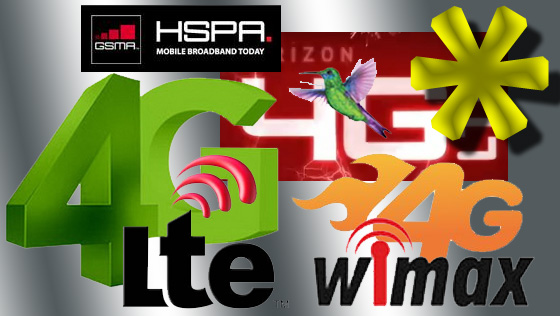 On the off chance you were on a lunar mission last week and missed the news, RIM announced some new BlackBerry smartphones and it would appear they have jumped into the pool with everyone else and have labeled them as "4G".  We've received some emails requesting CrackBerry to jump into this particular swimming pool and act as a lifeguard of common sense ... and I couldn't answer the call any faster. Keep reading and we'll find out what's really 4G and whats just FauxG when it comes to smartphones.

This past CES in Las Vegas my CrackBerry pals Obi and Jared got really tired of my ranting about all the "FauxG" being thrown around and it absolutely drove me nuts.  I took this picture at the Verizon booth because it was the closet to "real 4G".

Many may ask what is the difference between true 4G and fake 4G.  To begin to let's look at what 4G actually means.  Many believe it's just simply the 4th Generation of cellular technology.  Sprint for example evolved from 2G - 1XRTT on to 3G -  EVDO and have arrived at 4G - WiMax.  Verizon jumped and called their LTE deployment 4G.  Not to be out done, T-Mobile decided to label their HSPA+ roll-out 4G since it was the next set beyond simple HSPA.  Right behind them AT&T called their HSPA+ 4G.  Early this spring Canada's 3 big carriers ran into the 4G party and changed the name of their HSPA+ networks to 4G.

Next to arrive were the phone manufactures.  One after another the next 4G phone was being introduced.  Last week the BlackBerry 7 devices were the latest to get in on the 4G fun.  It has simply become a laughable joke to those that see the big picture.

The logical question would be: "So if 4G is not just the next step in cellular technology what is it?"  Cellular terminology like EVDO, EDGE, HSPA+ & 4G is determined by the International Telecommunications Union.  There are strict guidelines which decide what is and is not technically 4G so let's put our propellor hats on and look at the requirements for a 4G network as defined by the ITU:

If you're able to wade through all that and you ask "Based on the ITU-Advanced criteria, which carrier currently offers 4G?"  Answer....None.  The article should end here since we've determined what technically is and is not 4G but the water in the pool got more merky back in December of 2010.  Due to pressure in the industry with all these carriers and manufacturers rushing to market with the next 4G netowrk and and devices, the ITU decided to broaden the 4G definition.

Following a detailed evaluation against stringent technical and operational criteria, ITU has determined that "LTE-Advanced" and "WirelessMAN-Advanced" should be accorded the official designation of IMT-Advanced. As the most advanced technologies currently defined for global wireless mobile broadband communications, IMT-Advanced is considered as "4G", although it is recognized that this term, while undefined, may also be applied to the forerunners of these technologies, LTE and WiMax, and to other evolved 3G technologies providing a substantial level of improvement in performance and capabilities with respect to the initial third generation systems now deployed. The detailed specifications of the IMT-Advanced technologies will be provided in a new ITU-R Recommendation expected in early 2012.

Essentially the ITU recognized the term 4G had been so bastardized that they couldn't walk back the cat.  To silence the debate the ITU simply lowered the bar so as to included HSPA+ and current WiMax/LTE networks.  This loosening of the definition means that Verizon, T-Mobile, Sprint, Rogers, Telus & Bell's current versions of 4G are now considered 4G.

Now what about these BlackBerry 7 devices announced last week, are they 4G?  Based on the new ITU defintion, No.

Although the new BlackBerry smartphones sport a terrific 14.4 Mbps HSPA modem, 14.4 does not cut the mustard of HSPA+.   The new HSPA modems are a welcome increase from the 3.6Mbps in the Bold & Torch currently available, but do not pass the 4G test.

Do I personally care?  No.  I still really want a 9900 and will be standing at the store the day it's available to tether my PlayBook to a 14.4 modem which will be a remarkable improvement over the sad performance of my Torch over Bluetooth.  Obi and Jared will be happy to know I've succumbed to the 4G debate and thrown my hands up and just don't care anymore.

To summarize, a 4G network must be LTE OR WiMax OR HSPA+