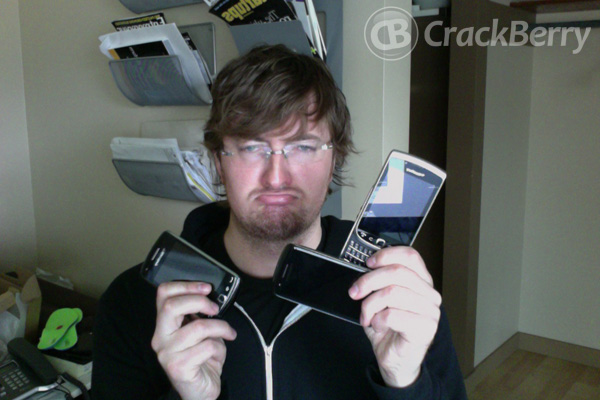 Don't be sad... it'll be more fun to upgrade to a new BlackBerry 10 phone anyway!

In the past 24 hours I've literally received three emails and twice as many tweets from readers asking me if they'll be able to upgrade their BlackBerry 7 phone to BlackBerry 10 when it comes out later this year.

The answer is still no. Seriously. This isn't news. There should be no surprise here. It's been *crystal clear* since Research In Motion unveiled the BlackBerry PlayBook on September 27th, 2010 at BlackBerry DevCon that devices on the existing BlackBerry OS would not be upgradeable to the new QNX-based platform. It is a new platform. A fresh start. Period.

BlackBerry 7 (and BlackBerry 6 and 5 and 4 for that matter) phones are all built on the old Java-based BlackBerry OS. The BlackBerry 10 platform is built upon the QNX platform that first powered the PlayBook/BlackBerry Tablet OS. From there, at BlackBerry DevCon 2011, RIM re-christened the platform to be called BBX, a clever name combining BlackBerry with QNX. Due to prior trademarks, RIM had to drop the BBX name and yet again re-branded the new platform, this time to BlackBerry 10 (X does equal 10 afterall in Roman numerals).

While BlackBerry 10 does skip over BlackBerry 8 and BlackBerry 9, I'm *guessing* the similiarity in naming convention to BlackBerry 7 is one of the factors contributing to this false hope that BlackBerry 7 phones will get an upgrade. Also, you can't really blame new BlackBerry 7 owners -- especially those buying a phone this year -- for thinking and hoping that their brand new device should get the software upgrade that's only months away. But trust us, it won't. And also trust us, it *is* for the better in the grand scheme of things. We want BlackBerry focused on building a platform for the future - not one that keeps the past alive.

So don't be sad BlackBerry 7 owners... even though it might cost more to force an early upgrade to BlackBerry 10, I think it's going to be worth it. Besides, buying a new phone will be better for the economy (and RIM stock!) than upgrading your existing phone. Plus it's more fun to buy a new toy anyways than upgrade an old one. Let's just hope RIM and carriers put some compelling trade-up incentives in place to ease the pain.