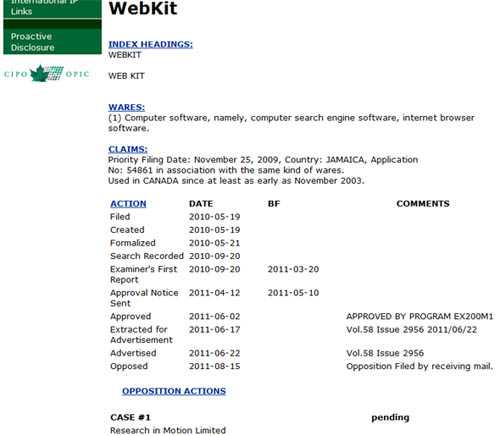 The word WebKit has been tossed around by many companies for a few years now. It has been originally coined by Apple as the power behind the Safari browser. WebKit is essentially a “layout engine” that enables browsers to render pages. In 2005, at Apple’s WWDC, Bertrand Serlet (former Senior VP of Software Engineering) was made known that Apple was going to open-source WebKit. Fast forward to May 19th 2010 to filed trademark application 85041789 under International Class 009 – Apple applied to trademark WebKit with the US Patent and Trademark Office. International Class 009, “Computer software for use in developing internet browser software”.

Now in what appears to be an odd move (as far as timing is concerned), RIM filed their opposition to the application on August 15th 2011, with an extension granted 3 days later that allows them to officially submit their Statement of Opposition by November 22nd of this year. This claim can be found on the Canadian Intellectual Property Office website. Right now we can only speculate as to why this is happening now. Torch Mobile was one of many developers that were widely known to further develop WebKit. Remember what happened in August of 2009? Well, RIM acquired Torch Mobile, which then enabled them to include a WebKit-based browser on their BlackBerry devices. It will be quite interesting to see what kind of opposition RIM can offer- hopefully it will carry a little more weight than the recorded “Used in CANADA since at least as early as November 2003.” We’ll be sure to report more on this claim as it develops.