There are numerous iPod/iPhone docks on the markets these days, but there are very few options available for BlackBerry users to wirelessly stream music from their devices. There is of course the BlackBerry Stereo Music Gateway that runs off Bluetooth, but it has limited range, about 20-30 feet from the device. For me, that distance limitation does not make the BlackBerry Stereo Music Gateway a useful accessory for me. I am constantly moving around my house, and lose connection.

The solution to this problem has come from a new company called Cignias. They have developed an advanced wireless music system that allows the user to wirelessly stream music from their BlackBerry to the NAO Symphony System via Wi-Fi. The system also allows for streaming via Bluetooth, and the old fashioned way by a direct connection via 3.5mm cord. 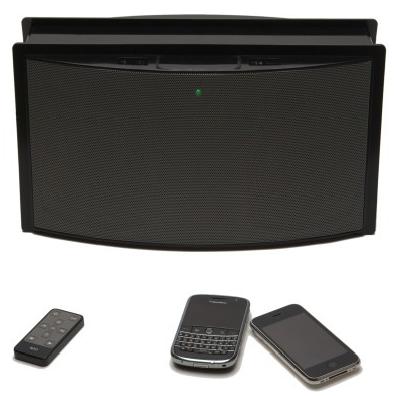 I first introduced you to the Cignias NAO Symphony Music System last month at CES.  Let's recap with some specs of the unit:

Now don't get too scared by that price. It is on the steep end for music docking systems, but I assure you, the quality is there to make this worth every penny. I am used to a full sized stereo system for my house. I have full size Klipsch towers that I generally use for all my music and movie needs, so I have high expectations.

The NAO Symphony is considerably smaller than my home stereo system, and had me concerned at first about sound quality. My game plan was to use the NAO Symphony downstairs so I could enjoy music when working in my home office. I placed the unit in my kitchen, had to compromise with my wife, and followed the provided directions to download the needed applicatios from BlackBerry App World. There are two apps that users can possibly download, each having a slightly different function for the NAO Symphony system. The first app was called PodNAO. This app allows the user to wirelessly control a docked iPod/iPhone on the NAO Symphony. The second app is called MaestroNAO. This app allows the user to wirelessly stream music from their BlackBerry device to the NAO Symphony. After these apps were downloaded, I continued with the included directions and linked the NAO Symphony to my home wireless network and I was ready to go.

On the front of the NAO Symphony, there is a LED light that informs the user what function the unit is in. They are as follows:

I launched the MaestroNAO app on my BlackBerry Bold 9700, and within seconds I was connected to the NAO Symphony. The screen that comes up looks just like what you are currently used to for the media app on the BlackBerry. I can see listings by all songs, artists, albums, playlists, or genres. Simply highlight the selection you want, click on it, and next thing you know... you have streaming music. I have the same control over the music that I would as if I were listening to it directly on my BlackBerry.

Now that I have streamed directly from my BlackBerry, I want to give the PodNAO app a shot, and see how well it performs. I simply docked my iPhone (don't hate me) into the NAO Symphony, and then launched the PodNAO app. Just like the MaestroNAO app, it launched quickly, and found the docked iPhone. I went to all songs, and there it listed all songs I had stored on my iPhone. Way cool. I could control my playlists, and all the time, be anywhere in my house where I had Wi-Fi coverage.

The sound quality was very impressive. I honestly wasn't expecting too much from such a small unit, but the sound was crisp and clear, and I could even hear the music upstairs. The volume can easily be adjusted with your BlackBerry as you move around to different locations within your house.

The Cignias NAO Symphony is a great compliment to the BlackBerry smartphone! It is on the pricey end of the market, but unlike other devices, it can receive software updates over Wi-Fi in the background, and I'm told they are looking into expanding features in the future to possibly include internet radio and PC streaming. The NAO Symphony is currently being sold via the Cignias website for $299, with availability to US and Canada.