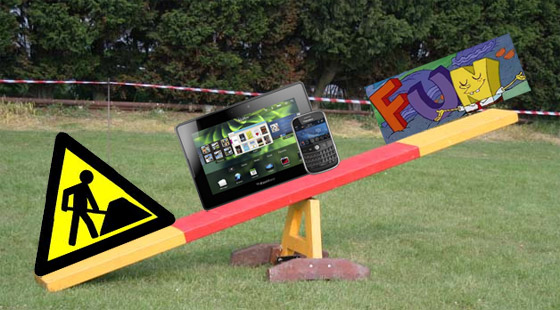 BlackBerry Balance should really be called BlackBerry You-Shall-Not-Pass or BlackBerry Wall, but I imagine Balance looks a bit better in the marketing materials. BlackBerry Balance isn't an application, it's an idea. Your Work life and Personal life can coexist on the same device, but they must always remain separate. Corporate data is sensitive data, no matter the size or operation of a company. Letting that data roam free amongst personal applications could be a disaster.

BlackBerry Balance is the wall that allows corporate data to be used on personal devices. This means a company can be secure in letting people bring their BlackBerry smartphone in "off the street" and use that phone on the secure corporate network. Running on a Blance'd smartphone or tablet, applications know when they're using work data; they won't allow it to be transferred to personal applications. Copy and Pasting work data into a tweet? Not with BlackBerry Balance you're not.

BlackBerry Bridge is a secure window allowing the BlackBerry PlayBook to view information coming from the smartphone. Many might see this application as a crutch, providing temporary access to messages, calendars, and the like. BlackBerry Bridge isn't going anywhere; it and native applications will exist side-by-side on the PlayBook. Bridge represents a choice for BES Admins.

The very first time a smartphone and PlayBook are connected the two devices work together to create the BlackBerry Bridge pairing key. If the two devices don't agree on the key or if the device goes out of Bluetooth range, Bridge'd applications are immediately locked. If the smartphone is connected to a BES, Bridge'd apps inherit all of the rules from the BES; and all of the data displayed on the PlayBook is considered work data.

Work data is stored in a separate, encrypted file system using the BlackBerry Bridge work key to encrypt and decrypt data that is cached or stored for use on the tablet.  This is not a separate area of the file system, the work file system is completely separate from the personal file system.  The BlackBerry Bridge work key is not stored in persistent memory on the PlayBook; the key is only stored on the smartphone. If the PlayBook is stolen or lost, work data remains encrypted as the key to decrypt it is not stored on the tablet.

BlackBerry Balance on the PlayBook

Right now, this very minute, an administrator running BES 4.0 and higher has two options when it comes to BlackBerry Bridge. One: prevent Bridge from running on the smartphone, Two: permit it. Applications Bridge'd to the tablet inherit the same security rules as the BES connected phone. Cashed data on the tablet is encrypted with the BlackBerry Bridge work key.

In the near future, Research In Motion will release the PlayBook Administration Service as a free-add-on to BES 5.0; administrators will have the option to directly manage the PlayBook. BlackBerry Balance on the PlayBook, is a big part of that. Admins will be able to push data, apps, and security rules to the business side of the tablet while ignoring the personal side.

As with BlackBerry Bridge, work data is stored in a completely separate file system and encrypted.  Work data and Personal data do not mix on a Balance'd PlayBook.  At any time, the BES administrator can destroy business data and disassociate the device from the enterprise network without affecting the personal side of the device.

Research In Motion has always striven to give its customers the ability to choose - both at the enterprise and consumer levels. With a wide variety of form-factors, the BlackBerry appeals to many different people and usage scenarios. With BlackBerry Bridge and BlackBerry Balance, administrators have new choices when it comes to devices on the network. Personal smartphones can be added to the network without compromising security.

Admininstrators will soon have even more choices when it comes to deploying the BlackBerry PlayBook on their corporate networks. BlackBerry Bridge represents a simple and effortless expansion of the secure corporate network on to the tablet. With no intervention required, the corporate user's tablet can take advantage of the existing security rules on the smartphone to display information without compromising security. Or, with one small change to the BES policies, the administrator can prevent Bridge from being used on BES-connected devices.

PlayBook Administration Services and BlackBerry Balance will add an additional option of control for BES connected tablets. Even provisioning an individual user's personal BlackBerry PlayBook will be permitted with BlackBerry Balance and the security features built in to that system. In the end, it is up to the network administrator to determine how devices will connect to and use the corporate network. Bridge and Balance simply allow that administrator more control than ever before.