Transformers! More than meets the eye! If you were born in the late '70s or early '80s there's a good chance one of the cartoons you watched and/or worshipped as a kid was Transformers. I loved that show. The moment that awesome theme song started I was transported into the world of robots and the ongoing war between the Autobots and Decepticons.

The Autobots were the good guys, led by their glorious leader Optimus Prime, a noble robot (with an amazing voice) who transformed into a semi-truck so he and the Autobots could "Roll Out" and ride around with humans incognito.

Even better than watching the cartoon were the Transformers toys, which I had a bunch of. These were brilliantly designed and built for the day. You could manually manipulate them to go from their robot to thing form, and some of the characters could even connect together to join up and make super characters. I remember between myself and a couple of friends, we managed to own all of five of the Predacons Decepticons with an animal theme — and the first time we got together and assembled Predaking was basically toy magic.

Fast forward 35 years, and that Transformers toy magic has been significantly leveled up. Enter the Robosen auto-converting Optimus Prime robot! Featuring 27 servo motors, controlled by 60 microchips, and all connected to your smartphone so you can control Optimus with your phone or voice, this is the ultimate toy for adult kids.

The price tag has also been leveled up, of course; the flagship Optimus Prime robot will set you back $1,000, which is why you should enter CrackBerry's Top 22 of 2022 Favorite Tech Things Holiday Contest where you can have a shot of winning one for free. 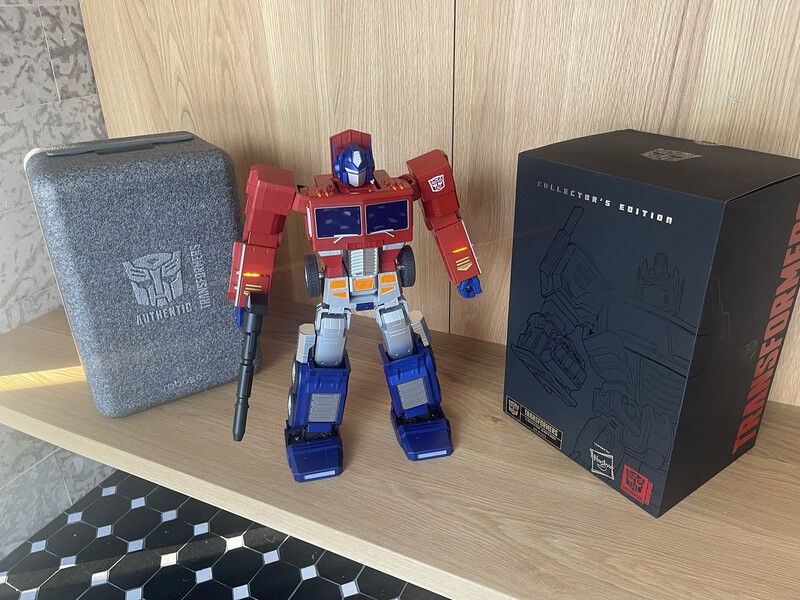 When Hasbro announced its deal with robot-toy maker Robosen in 2021 and showcased the Robosen Optimus Prime it was a HUGE deal in the world of toys and toy collecting. It took Robosen over 11 years of R&D and manufacturing to bring this toy into reality, which is both admirable and CRAZY, considering how quickly we build and then dispose of things in today's culture.

It was initially released as a limited edition, which sold out immediately, so robot Prime found a lot of action on secondary markets like eBay where people were willing to pay a lot more than the MSRP to get their hands on one. A friend of mine who's a local toy collector managed to get three units, and I bought one from him, making my and probably every Transformers-loving kid's childhood dream come true.

The good news for those who missed the limited edition is that Robosen has stocked up again and in 2022 it added a second version of robot Optimus Prime that's a bit smaller (but still big at 16 inches tall in robot form!) and less expensive but not any less fun.

Having an actual robot Optimus Prime that can transform on its own is basically the greatest thing ever. It makes me feel like a kid every time I see it (even if I don't use it) and its simple existence makes me believe that dreams really can come true! The reactions to this incredible toy (if you can really call it a toy) are always amazing to see. This video from Adam Savage's Tested YouTube channel captures it well:

So what can do you with robot Optimus? It's more like what can't you do! The killer feature is obviously having Optimus Roll Out and transform from robot to semi-truck, and then you can drive him around like a remote-control car. Though he's more impressive in his robot form, when he's programmed with more than 150 original sounds and actions. Optimus has moves, whether they're dance moves, fighting moves or fitness moves — he'll even drop and give you 20. One of the coolest features is that even when he's just standing there doing nothing, Optimus Prime will breathe. It's a weird and subtle motion to witness that makes the robot feel so much more human. It's definitely a feature Elon Musk will want to steal for his Teslabots if the quest is to make them members of the family.

If you've got the time and have the brain for it, you can even program him with your own custom actions or download and load up actions others from the developer community have made.

I haven't purchased it yet, but Robosen also recently released the ultimate accessory for Optimus Prime: his kick-ass Optimus Prime Trailer Kit. This is another robot unto itself, with 2,000 components brought to life by 16 servos.

A couple things to keep in mind

As much as this is a toy, it's probably best not to treat it like one. With so many gears and servos and moving parts, I'm really cautious when I "play" with my robot Optimus Prime, and I don't play with him that often. Most of the time he's a functional and amazing display piece that gives me a moment of delight every time I see him. But if I ever do need a pick-me-up, hearing Optimus Prime drop for pushups or throw out some badass lines works every time.

One of other thing to consider is pets. I fired up Optimus Prime to grab a couple photos for this post... which quickly turned into a stand off. While I'd typically bet on Optimus Prime to win against Megatron, in the battle of robot toy vs dog with teeth I'd still bet on dog. 🐶