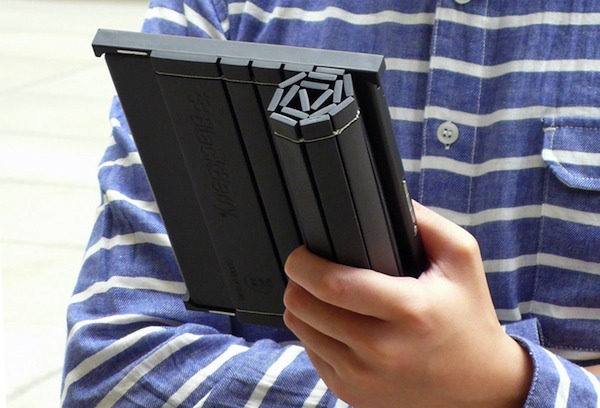 There are loads of great cases for the BlackBerry PlayBook ranging from a simple sleeve to the leather envelope to the fancy DODOcase. None however have struck my fancy quite like this concept case I came across in the forums earlier today. Called the literati, this bamboo case was a concept designed by a company called Goods Of Desire. The case itself covers the PlayBook when not in use and the bamboo strips roll around to reveal the screen, also giving you a handle of sorts to hold on to.

The design is modeled after the manuscripts of ancient China, where prior to the invention of paper, 'books' consisted of words carved into strips of bamboo, held together by string. While advancing in the text, a reader could coil the manuscript progressively into one hand. 'Even with the advent of the printed-paper book,' G.O.D notes, 'this way of holding a book remained for chinese readers.'

While the case is merely a concept and never made it into production (despite the huge BlackBerry logo) it really is a pretty cool idea. Rolling up the bamboo lets you easily hold onto your PlayBook with one hand and also prop it up for movies or typing -- pretty cool stuff.

Would the literati be something you would use on your BlackBerry PlayBook? Or is to extreme for daily use? Hit the link below for more photos and then sound off in the comments.

The BlackBerry bamboo case by G.O.D
Discuss more in the CrackBerry Forums