I haven't been playing many games on my BlackBerry lately. But when a good and enjoyable one comes along I'll jump on it. I normally go for puzzle games but I always like to come try out other types of games too. And one recently got my attention. It's one of those games that is frustratingly hard and annoying but also addictive. It's been a while since I have played such a game and I can't put it down.

The game is called CubiX. You play as a cube (though it's really a square as it's not 3D) and you have to get to the end of the level by dodging the triangles and using the squares to assist you. You control the 'cube' by tapping the screen. Sounds simple, right? Yes, the idea of the game is but once you start playing, that's another thing.

There's a tutorial at the beginning to help get your started but even that is difficult in itself but perhaps it's due to the fact that it pauses to show you how to do things. Once you get the idea of the game I suggest just going through to level 2 to actually get proper game play.

Like I said, the object of the game is to get to the end without touching the triangle shapes or bumping into the square shapes. The square shapes are there to assist you, to shift upwards and along or to avoid the blue zones, you're only allowed to touch the top of them. If you bump into anything the level automatically restarts. You will find a pin icon in the bottom right of the screen and if you time it correctly, wherever you drop the pin this will be where the level restarts after you hit something you're not meant to. You have a finite number of pins per level, so use them wisely. 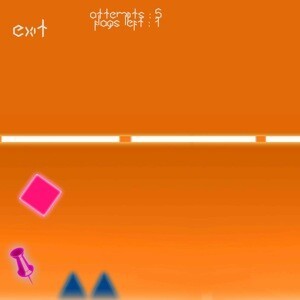 The game has been created in Unity and is pretty smooth. I do like that you can use the spacebar on physical keyboard devices in order to control your 'cube'.

CubiX is available for all BlackBerry 10 devices. It is free to dowload and you get the first pack for free. You can unlock the second pack for $0.99.

I'm looking forward to more levels. It's a fun game to play and it is very addictive, I love it. Check out the video trailer for CubiX above.