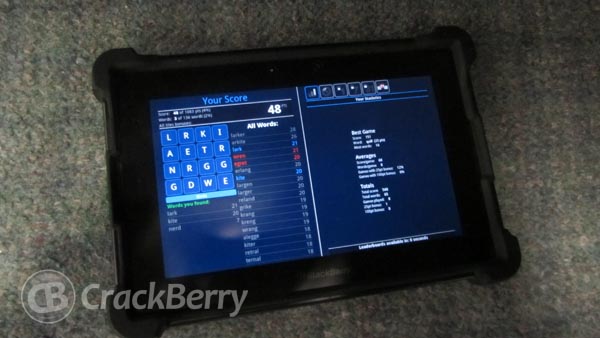 WordHero for the BlackBerry PlayBook will easily put your mastery over the English language to the test. The game play is somewhat similar to Word Mole on BlackBerry smartphones, where you have to create words from the letters given. In this case, you are limited to letters in a 4 by 4 grid (and they don't disappear after being used either). Every word tile can be used twice – get bonus points for doing so. A green dot on a tile is worth 25 points and an orange dot is worth 100 points. What you have to do is spell words by sliding your finger forwards, backwards, up, down and diagonally on the game board. Your list of found words will appear to the right of the game board, along with their score values. Hurry up though, as you are playing against the clock

What I like about it is that, even though it seems like you are playing by yourself, it's actually a multiplayer game. Everyone is playing the same game tiles at the same time. After you finish the game, you can then view your results average score, best score or words found, words missed, as well as how you rank on the leader boards) If you look at the description on BlackBerry App World, it's said that you'll experience a black screen bug until you upgrade your PlayBook to 2.0.1, but the issue will persist regardless, albeit infrequently. I'm not sure where the developer gets their list from, but some common words, such as neon, are not recognized. I'm hoping that their own vocabulary will increase soon. Regardless, WordHero is a great way to kill time, train your brain and be competitive with other would-be word smiths. You can get Wordhero, for free, from BlackBerry App World.