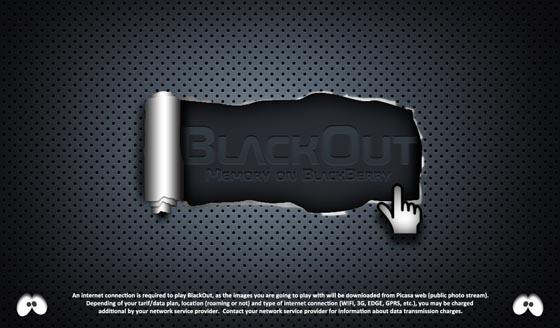 A couple weeks back I noticed a few tweets about a new game called BlackOut by Elements Multimedia. Not one to shy away from a challenge I immediately fired up my PB and downloaded it. Boy am I glad I did. On the surface it may just be a simple memory game but it has a way of getting the old brain juices flowing. It's certainly not one to miss if you're in the mood for hours of mind boggling fun. Click on the jump for more information and screenshots.

Truth be told at first glance I expected to see an ordinary field of flip cards that I would just turn over to match. I was pleasantly surprised this not to be the case. Games are timed and there are three levels of difficulty to choose from. (Easy = 6 tiles, Medium = 24 tiles, and Hard = 96 tiles). Unlike other games with a given set of stock photos, it pulls its images from the public web albums API of Picasa using keywords of your choosing. This opens up a whole new playing field of endless possibilities. Just think about all the different puzzles you could create. I've already started a Star Trek one and a few others. Each picture is dazzling on the PlayBook's screen.

Another favorite feature of mine is its twitter integration as mentioned earlier. You can post your scores or ranking (they list the top 100 scores in each category), challenge your friends to beat your fastest speed, or beat someone else's. I think this is what's turning me into a BlackOut fanatic. When it comes to games I've always been a competitive person. If I see my score beaten there's just something in me that has to keep playing until I either regain the title or concede defeat.

Since the recent update game play is now smoother and quicker. It's definitely more responsive now when tapping and turning the cards over. Thanks to the update I beat my own personal best score. Not too shabby if you ask me. Although I'm a sucker for these kinds of games. I have to admit I have yet to try the hard level. I'm working my way up.

The only issue I've found is when there aren't enough images to populate. You'll need to enter in another keyword. It may not be the most sophisticated, complicated, and graphics heavy game out there for the PlayBook but I'm hooked. If you're looking for a great way to pass the time, interact with people on all platforms, and keep your mind occupied all at the same time then this is the game for you.