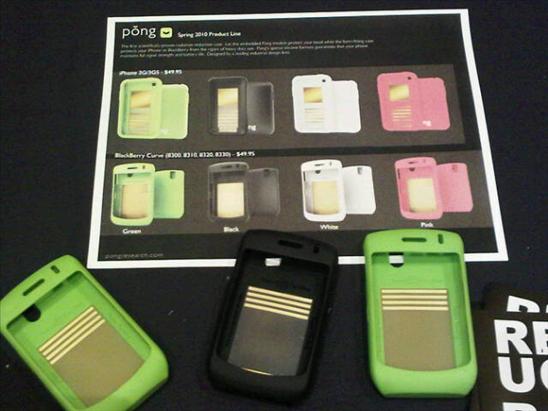 For the past little while there has been a lot of information in the media regarding cell phone radiation and the possible effects it has on a cell phone user. The information has actually sparked conversation about the possibility of cell phones having to come with the issuance of a warning label attached to them in some states. Pong Research is looking to help calm the help everyone out with their recently announced protection cases which claim to stop up to 60% of all cell phone radiation. They have even got the FFC's backing with their claims through the laboratory tests the FCC has completed.

While using the protective cases signal levels remain unaffected which also effectively maintains battery life while offering radiation protection. At this point you can grab the case for iPhone, iPhone 3GS and more recently announced BlackBerry offerings coming compatible with 8300, 8310, 8320, and 8330 Curve series devices. Price is a little steep for me as each case will cost ya $49.99 but if radiation is a concern for you, price likely will not matter.