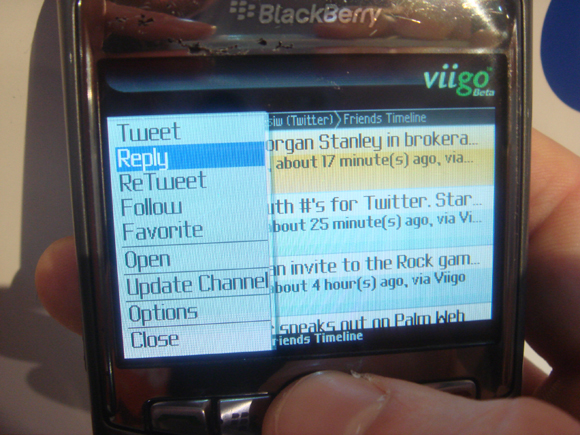 I know a huge number of our readers are fans of CrackBerry Viigo, so it was exciting to catch a glimpse of the latest alpha of Viigo (coming your way as a beta in the near future) which further builds onto the app's already awesome features.

New and notable are the addition of Social Networking and Shopping channels as well as improvements to Stocks & Finance which now allows you to build and track your own portfolio. The Shopping channel will allow you to browse software (think along the lines of our CrackBerry App Store within Viigo) and the Social Networking channel will allow you to do all your uhh... social networking... right within Viigo.

What had our on-location Crack Team most excited (I'm looking at you @azeis) was the addition of Twitter to Viigo. TwitterBerry is good and SocialScope is promising... and putting Twitter within Viigo is a whole new level of cool (so much so that I finally broke down and started up a personal twitter account. You can now follow me at twitter.com/crackberrykevin).

I also got the impression that all of this is just scratching the surface of Viigo's plans for 2009. You'll want to stay tuned for more. Lots more pictures after the jump. And if you don't have Viigo yet, you can pick it up for free from CrackBerryViigo.com.

Coming Your Way in Viigo - Social Networking, Shopping, My Portfolio