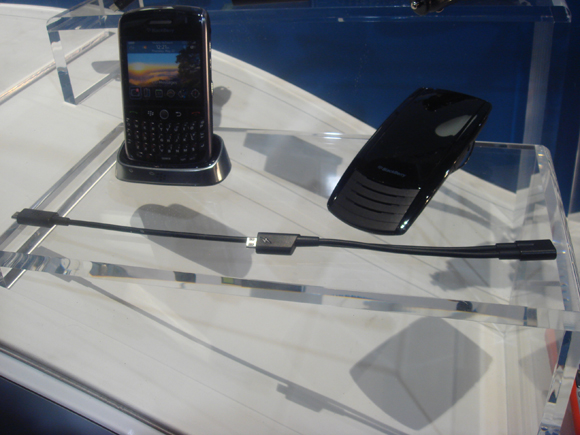 RIM has two new accessories on display at their CES 2009 exhibit which both look pretty cool...

Bluetooth Visor -  this one doesn't have an "official" go to market name just yet, but at CES it's being referred to as the Bluetooth Visor. You attach the Bluetooth Visor to your car's sun visor and connect your BlackBerry to it via Bluetooth. From there, the Visor's FM transmitter connects to your car's audio system, with all calls made and music played from the BlackBerry now routed through your vehicle's sound system. Think Remote Stereo Gateway / Bluetooth speakerphone all in one. The Visor will even autoscan for free FM channels to connect to. No pricing or release date as of yet, but look for it to hit in the weeks/months ahead. We'll definitely be carrying this at ShopCrackBerry.com.

Executive Headphones - RIM has taken the Premium BlackBerry headphones that ship with the BlackBerry Bold and bumped them up a notch. Their new Executive Headphones have a control dongle that allows you to play/pause and skip through music and the headphones come with interchangeable colored pieces so you can go from having black headphones to silver or red. They even come packed in a leather case so you can keep everything together and easily take them with you wherever you go. No pricing or release date just yet, but we're sure you'll see these hit soon!

Picture of the Executive Headphones and another of the Bluetooth Vistor after the jump!