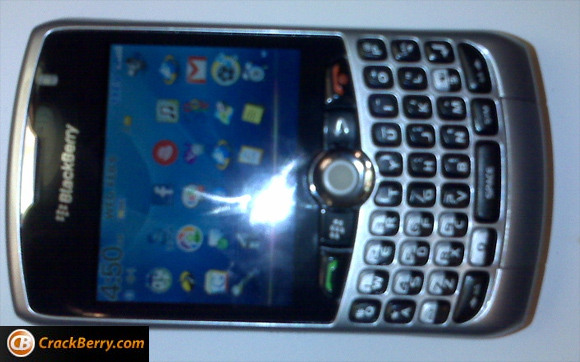 This just in from the CrackBerry.com Forums, images of what we are told is the long awaited and rumored CDMA-based BlackBerry Curve 8330. The images fit the description of what we have heard the CDMA-Curve will look like (basically the same as the GSM Curve, but with a Black keyboard). I wish a picture would have been posted with the battery cover off so we could take a better peak of what's under the hood!

There's been a lot of talk of the CDMA Curve as of late (sounds like CDMA carriers are doing testing on the devices now), so it was only a matter of time before we started seeing some pictures. I'm sure we'll see more in the days ahead. The member who posted these images suggested a mid-June release of the 8330 on Sprint and posted a few other details worth checking out.

I've seen conflicting information and received conflicting tips on the 8330, so I'm leary to post anything as "concrete" fact here in the blogs just yet (do a Forum Search for CDMA Curve and you can dig through the conversations). But it sounds like Sprint's CDMA Curve *should* have GPS (not a stretch since their 8130 and 8830 do), won't have WiFi, *could* have World Capability (have read both, but tend to think won't as that's more of an Enterprise Customer thing which is who the 8830 services) and should ship with Sprint's Sprint TV, Sprint Radio, Sprint Music Store and EVDO goodness. And for all you Verizon, Alltel, Telus and Bell customers here in North America, I don't think you have to worry that this was a "Sprint" post... I'm sure once the Curve comes to one CDMA carrier all the others will follow in relatively short succession.

As always, if you have any concrete tips and pics, you can always send it in to tips @ crackberry.com!

As I predicted, more images of the CDMA curve are already beginning to surface. The images above were posted to CrackBerry.com on February 9th. Now on February 11th our friends at BBGeeks have posted some shots of the CDMA Curve as well. These include screenshots, which help confirm that at least one version of the CDMA Curve will have full-out GPS (likely that Sprint will have it, and Verizon, like their 8830, will not). The screenshots also confirm the device model as being the 8330, and show that these beta/test models are still operating on OSv.4.3 (essentially the handheld only beta of the new OSv.4.5 that's coming out). Most likely these devices will ship with OS 4.5 by the time they hit the market.

Device Shot with Display on and OS Details shown

Bad Place to put a Watermark, but you can see that this testing
version of the device is running OS v4.3.

GPS Option show in Options. Good indicator that this device has GPS...
though this menu option has been seen before on early-version devices
that infact do not have it. Too bad we don't see a pic of the GPS in use!