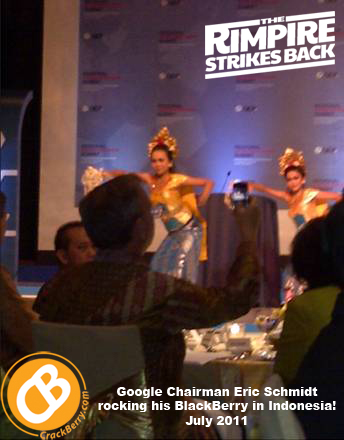 While Google's mobile operating system may have consumer market momentum with Android handset activations hitting 500,000 per day, one person who appears to not be in a rush to abandon his BlackBerry habit is Google Chairman Eric Schmidt. Schmidt was in Indonesia last week for an entrepreneurship summit, and one of our CrackBerry spies on the ground in Bali managed to catch Schmidt black-handed snapping a photo on his BlackBerry Bold 9780.

What's really funny about this photo is that it isn't the first time Schmidt has been photographed while taking a photo on his BlackBerry. Back in July 2009 he got caught using his Curve 8900 (see photo below). Past precedent is always the best indicator of future performance, so I'm placing my bet we'll see Schmidt upgrading to the BlackBerry Bold 9900 next month. I'm not sure what this says about Android, but it definitely says a lot of good for BlackBerry. Maybe it's the keyboard, maybe it's the world class security, the BBM, the battery life or impossible to ignore blinking red light... or maybe it's all that and more.

There's nothing really "new" in that Bold that can be justified as testing out the competition, so at the end of the day I'm thinking that Eric Schmidt just loves his BlackBerry. Smart man. Kind of makes you wonder if he also has a BlackBerry PlayBook running Android apps?