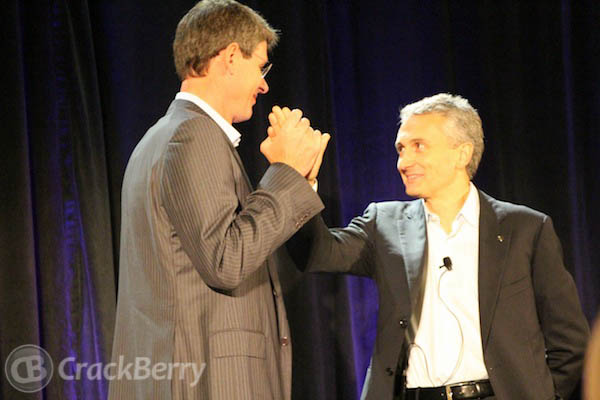 Gus has been covering RIM for a very long time - only a small number of people in the financial community know the history as well as he does. He stayed bullish for longer than the average analyst on this stock, but he's been quite cautious for a while now. He puts out a lot of research looking at the upside scenarios, but he is not ignoring the risks and he's still not bullish on the shares.

So what's in his report?

He points out that Wall Street financial estimates imply that most analysts think BB10 will fail. Naturally, if the Street is wrong, there is a lot of upside to be had. Just last week I laid out my view that RIM needs to get hardware pricing up, and they need to hang onto service revenue.

Scotia, along with most other analysts, are forecasting very low ASP (average selling price) for hardware next year. Scotia has an ASP forecast of $222 per device in fiscal 2014, despite the expectation of a heavier mix of BB10 with initial selling prices of around $600. Just as a reminder, RIM's fiscal 2014 actually ends in February 2014, so it represents about one year of BB10 availability.

I like the approach Papageourgiou is taking here. His official estimates are quite bearish, but he's looking into what happens to the stock if thing's aren't quite so bad. With is forecast of $222 for hardware despite launching BB10, that means RIM has to launch BB10 and then discount it heavily on the back of horrible sales. But what if it actually sells half-decent? He lays out the case for $390 ASP, more subscriber ads, and significantly more revenue and earnings.

In his upside model, Papageourgiou shows how RIM's phone shipments could go from his published estimate of 41.9 million to 56.6 million. Remember that RIM sold about 10 million units last quarter (they shipped only 7.8 million but I'm talking about end-customer purchases here). That's a rate of 40 million per year now. So growing to 56.6 million isn't really anything more than moderate success. But Scotia calculates that this could bring earnings per share to $4.39 versus their official $0.15 estimate.

That's the difference between a break-even business (essentially) and a reasonably profitable business. My take, by the way, is that things will not turn out to be shades of grey like this. It's either going to get way worse (and RIM will be bleeding cash big time), or the recovery model that Papageourgiou suggested in his report could look quite accurate.

Unless I missed part of his report, I don't think he discusses the upside potential for the stock price. He does say that even in the event of a breakup, the shares should be worth more than they're currently trading at. But that's more of a view on downside protection versus the upside scenario we're looking at here.

So I'll put my thoughts out there. Let me pre-frame this by saying it's a big IF ... but if RIM can actually deliver the $4.39 per share earnings in Fiscal 2014 (calendar 2013), then the stock is going to $40 again. Wouldn't that be a satisfying turnaround?

Yes. It would. But let's stay focused on what matters. Execution. RIM is not even close to being out of the woods. They needs apps, they need to release a polished OS on amazing hardware. They need carrier support and effective marketing. They need to hang onto enterprise support.

And if they do it? Wow. The upside opportunity is huge. I'd sure like to see that more than the alternative of a spiral towards break-up value.