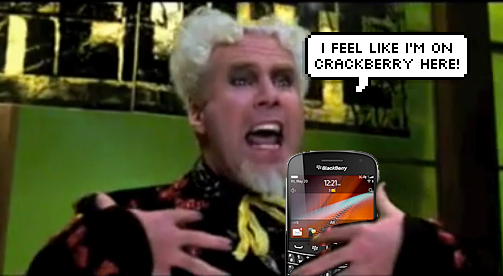 Maybe it's just because I blog about BlackBerry so am continuously typing it out and worrying about post headlines and tagging articles and site organization and visitors easily finding information about the device they own quickly, but I'm finding it **really** annoying that RIM decided to abandon/ignore the unified naming convention on their upcoming touchscreen BlackBerry Bold to be both the BlackBerry Bold 9900 and BlackBerry Bold 9930 without adding in an extra word to the name that encompasses both new models.

With the BlackBerry Curve 3G and BlackBerry Pearl 3G, RIM did the right thing in my opinion - they made it clear to owners that they had a uniquely different device from previous generations, and gave it a name that refers to multiple devices within that generation of device (the Curve 3G 9300/9330 and Pearl 3G 9100/9105). But for the new Bold now, everytime I want to talk about it in a manner that talks about both the GSM and CDMA variants of the device, I need to refer to both the Bold 9900 and Bold 9930 (If I just say 9900, I'm technically excluding the 9930... though I could say Bold 9900 Series... but that's not really an official name either).

Blue steel? Ferrari? Le Tigre? They're the same face!  Bold 9900? Bold 9930? For the majority of consumer purposes, it's the same device! I feel like I'm on crazy pills here! I want to refer to both under one name! If you're with me (or not), be sure to sound off in the comments. Not sure why I'm so ranty today... could be that I'm sick of waiting for my BlackBerry Bold 9900 / BlackBerry Bold 9930 and just have to vent. Notice how much easier that last sentence would have been if said I'm sick of waiting for the BlackBerry Bold Touch?