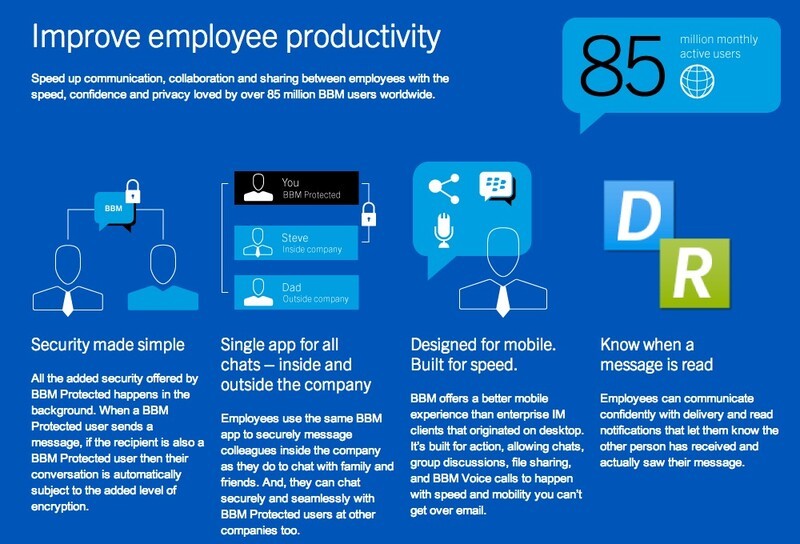 With documentation of $30 per year BBM Protected price plans starting to emerge, it's worth discussing what effect this might have on the company's earnings and stock price. As it stands right now, BBM Protected requires a BlackBerry device. That will change in the fall when it becomes available for Android and iOS through Secure Work Space but for now, let's just stick with the possible BlackBerry only numbers.

Prior to the cross platform launch of BBM there were about 60 million users, and I think it's fair to suggest that most of these were consumers, not enterprise users. How many BBM enterprise users are there? I'm not sure, but probably less than 20 million.

Let's do some blue sky analysis and assume BlackBerry can get 5 million enterprise users to pay $30 per year for this new service. I think that would be a pretty awesome conversion rate among its existing user base. To be clear I'm not predicting this will happen I'm just throwing it out there for discussion of possible financial upside.

5 million users at $30 per year means $150 million in additional profits. When you consider the company's share count of 519 million, it means BBM Protected, should it sell well, might add about $0.22 to earnings ($150 million over 519 million shares taxed at 25%. I'm simplistically assuming this service would have nearly 100% gross margin.)

If the company was to continue to show signs of stability, and if there was an expectation that this suite of eBBM services could continue to expand, it's possible the market might slap a 20-30 multiple on this earnings number. In short, this means that a highly successful launch of eBBM could add over $6 to the share price. With the stock trading below $10, that would be highly meaningful.

I will repeat myself for the sake of absolute clarity here. I have no idea how many customers are going to pay $30 per year for a BES-driven protected BBM service on BlackBerry hardware and eventually Android and iOS. But the numbers are clear when it comes to the potential.

BlackBerry does not need to sell hundreds of millions of users on such a service to make a lot of money for shareholders. They only need single digit millions of users to pay for a valuable enterprise service in order to make huge forward momentum on the earnings line.