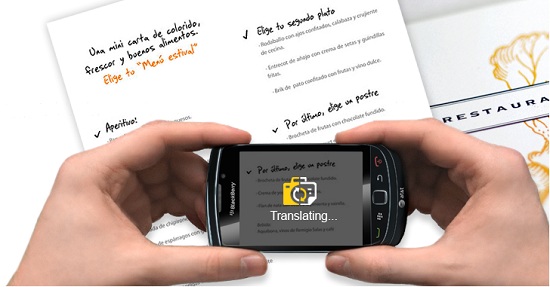 SHAPE Services has an impressive list of applications to stand behind. In the past, we’ve looked at Mobiola xPlayer, IM+: All-in-One Messenger and Business Card Reader; just to name a few. Recently, SHAPE Services contacted us to extend an invitation to the CrackBerry nation to join in on the beta testing for their newest creation called Photo Translator. Currently in version 0.9, Photo Translator helps break down language barrier by allowing you to capture a picture of text and then it translates it for you! The app uses Google OCR Engine and Google Translator. This is by far much easier than referring to a translation book or an actual translator (those guys are pretty heavy to carry around all of the time). Here’s a snapshot of the features available with Photo Translator:

While you’re at it, you should also check out the latest updates to their IM+ Talk and IM+ Messenger applications. In the newest beta of IM+ Talk, VoIP over 3G/EDGE is currently being tested; where in IM+ Messenger, they have added multichats to AIM and ICQ (previously, multichats could only be found for Skype and MSN). I, for one, have never been less than impressed with the applications that SHAPE Services have brought to the table, thus far. If you have a BlackBerry, with an autofocus camera (89xx, 95xx, 96xx, 97xx or 9800), I strongly suggest you try out Photo Translator. In fact, I think I’m going to give this one a thorough review in the near future.

For more information on Photo Translator, visit SHAPE Services
Check out other apps from SHAPE Services available from the CrackBerry App Store