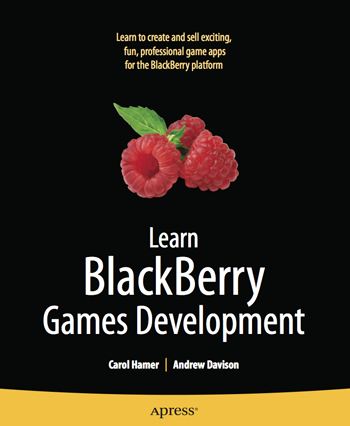 The good folks at Apress just let us know about a new book they have released called Learn BlackBerry Games Development. Written by expert software game developers Andrew Davison and Carol Hamer, the book shows you how to leverage the BlackBerry Java Development Environment to design and create fun and awesome games for BlackBerry Smartphones.

As a certified BlackBerry Addict and Fearless Leader of CrackBerry Nation, on behalf of BlackBerry owners everywhere our message to all the developers out there is GO BUY THIS BOOK. We need to see more good games available for BlackBerry. Press release below and click here for more details.

Last thought... I'm not quite sure why they put raspberries on the book cover instead of blackberries... but it works. Kinda hungry just looking at it. :)

New York, NY-The BlackBerry smartphone series has enjoyed a decade of success. Despite the arrival of the iPhone, BlackBerry's market share is still growing. It's the second most popular smartphone line in the world after Nokia. More than 50 million BlackBerry handsets have been sold worldwide. With such a large number of BlackBerry gadgets in the hands of users, developing on the BlackBerry has major advantages.

"Starting with the Snake game that came preinstalled on Nokia phones back in 1998, as soon as people started creating cell phones with enough computing power to run simple applications, games were an obvious choice," says Carol Hamer. "Since people play mobile games in their spare time on the go, the most popular games are usually quick and easy to learn." Mobile games ensure that there will always be a market for simple puzzles and new versions of familiar classic arcade games. Mobile devices will always have limitations that PCs and dedicated game consoles don't have (screen size, computing power, battery life, etc.), but their portability makes for an interesting trade-off.

So while modern computer and console games require the virtual equivalent of a movie studio to produce something that will sell, mobile games have created a space where one engineer working with a simple (but brilliant) idea can still invent a hit. The BlackBerry is a great platform for gaming because the advantages for developers include:

2) BlackBerry provides users with cheap, reliable Internet service that can be used for online gaming.

3) The BlackBerry experience includes a communications network with the tools to create BlackBerry-specific server-side applications. The BlackBerry Enterprise Server (BES) allows corporations to give their employees secure access to company intranets on their smartphones. BlackBerry Internet Service (BIS) also offers email and Internet service. A multiplayer game server can push game updates to the players' smartphones rather than requiring the client side of the game to regularly poll the server.

4) The BlackBerry Theme Studio makes it easy to create themes (also known as skins), so you can tie in the complete BlackBerry experience with your game or game service.

5) And don't forget BlackBerry's thumb-friendly QWERTY keyboard, which makes it a natural choice for games that require complex input.

About Learn BlackBerry Games Development
BlackBerry smart phones aren't just for business. In fact, throw away that boring spreadsheet, tear up that yearly budget report-the BlackBerry is a lean, mean game-playing machine. Carol Hamer and Andrew Davison, expert software game developers, show you how to leverage the BlackBerry Java Development Environment (based on Java ME) to design and create fun, sophisticated game applications from role playing to duelling with light sabers.

The BlackBerry: not as clumsy or as random as a blaster-an elegant device, for a more civilized age. In this book, Carol and Andrew give you the professional techniques you need to use music, 2D and 3D graphics, maps, and game design patterns to build peer-to-peer games, role playing games, and more for the BlackBerry. This book is for game enthusiasts and software engineers who know at least a bit of Java and want to program games for the BlackBerry. No prior knowledge of Micro Edition programming is required.

About the Authors
Carol Hamer received her Ph.D. in Number Theory from Rutgers, the State University of New Jersey. Since then, she has worked as a software engineer for ten years in the U.S., France, and Switzerland, including three years working for In-Fusio Mobile Games. Carol has written three books on mobile game programming for Apress: J2ME Games with MIDP2, Creating Mobile Games, and Learn BlackBerry Games Development. She writes a blog called A Little Bitty Java (http://bittyjava.wordpress.com/) with programming ideas, troubleshooting tips, and code samples.

Andrew Davison received his Ph.D. from Imperial College in London in 1989. He was a lecturer at the University of Melbourne for six years before moving to Prince of Songkla University in Thailand in 1996. He has also taught in Bangkok, Khon Kaen, and Hanoi. His research interests include scripting languages, logic programming, visualization, and teaching methodologies. This latter topic led to an interest in teaching games programming in 1999. His O'Reilly book, Killer Game Programming in Java, was published in 2005.

About Apress
Apress, Inc., part of Springer Science+Business Media, is a technical publisher devoted to meeting the needs of IT professionals, software developers, and programmers, with more than 1,000 books in print and a continually expanding portfolio of publications. Apress provides high-quality, no-fluff content in print and electronic formats that help serious technology professionals build a comprehensive pathway to career success. For more information about Apress, visit www.apress.com.