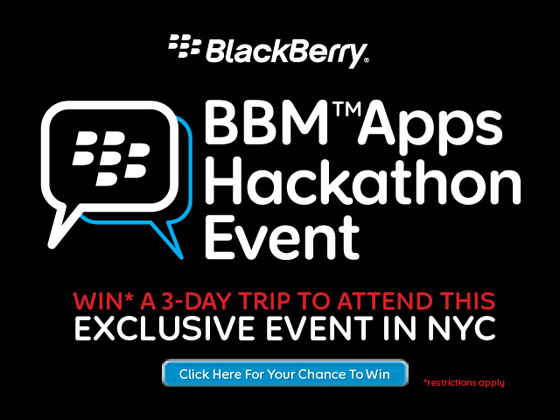 OK BlackBerry Developers! If you've been reading the blogs, you're probably aware of the BBM Apps Hackathon event that RIM announced last week. If not, be sure to check out our original post, follow-up post (which lists webinar dates to get you prepped) and the official website at BBMNYC.com for full details. In summary, RIM is hosting a BBM Apps Hackathon Event August 11-12 in NYC, an exclusive event that gives developers the opportunity to participate in an apps-building marathon using the BBM Social Platform. RIM experts will guide participants through different development approaches and techniques that leverage the viral/social functionality of BBM Social Platform and best integrate with applications.

In addition to there being 10 spots up for grabs via the contest on the official website, RIM has partnered with CrackBerry to let us run our own contest and pick a worthy BlackBerry developer to attend the event on behalf of CrackBerry Nation. That's right BB devs... we're picking one of you to attend the event in NYC. And in addition to the airfare and hotel being covered, we're also going to give you a BlackBerry Bold 9900 and $500 in spending cash! The full details for eligibility and how to apply are below, but the long story short is that if you want to go, you're going to have to email me directly ASAP... we're picking the winner this Friday, July 22nd.  Keep reading for the full details!

The eligibility criteria that developers need to meet to enter this contest include:

What you get if you're selected to go on behalf of CrackBerry:

To apply, send an email directly to me at [email protected]  Make the subject of the email BBM Hackathon Application. The odds are good that if you're an established BlackBerry developer I'm going to know who you are already, but regardless let me know your company name, the apps you have built previously, why you want to attend (give me a little brief of the app you want to make) and make sure you meet all the eligibility requirements above. Me, Adam and Bla1ze will be pow wowing Friday morning to decide the winner and who gets to go on behalf of CrackBerry (we may accept bribes... so if you want to try and bribe us make it good!). Good luck!!
From the new Editor's Desk