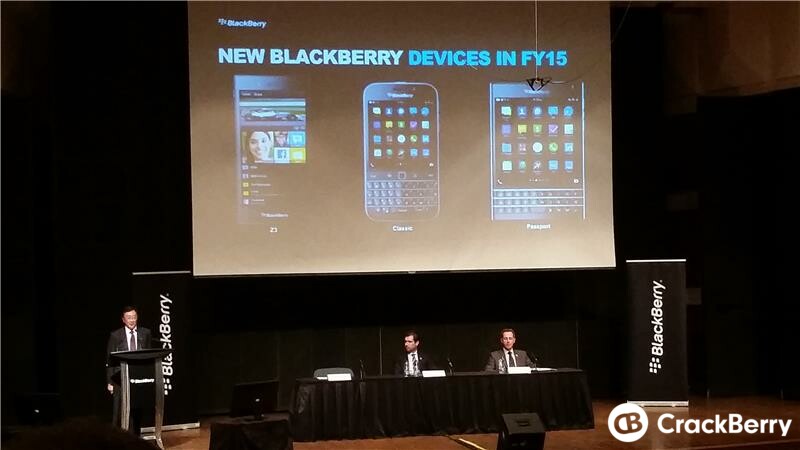 Today was a pretty awesome day for BlackBerry and BlackBerry fans all around. Yesterday BlackBerry announced their partnership deal with Amazon and that was pretty awesome as well, but for some folks it felt like a precursor to some possibly bad news waiting within BlackBerry's earnings report. Get the good news out because there's probably some not so good news coming. However, anyone who did have that on their mind was pretty quickly proven wrong for even thinking that.

The earnings report came out and the numbers weren't that bad at all, some would even say amazing and fantastic all things considered. There's still plenty of work to be done, but for now there are great changes happening. Cash climbed to $3.1 billion, up from last quarter's $2.7 billion, revenue was $966 million, down only $10 million from last quarter or 1%, operating expenses dropped another 13% from last quarter and suddenly BlackBerry was making some good headlines for themselves. Not across the board mind you, but that's just the way it is.

On top of the earnings, BBM is currently on a roll with registration of BBM users hitting 160 million with 85 million active monthly users and with expected growth to reach 100 million active users when more initiatives roll out such as BBM hitting Windows Phone in July and being preloaded on Nokia and LG devices. If that's not enough, new features and additions are coming to the service, such as the expansion of BBM Money, more stickers, and even more advertising options for larger corporations through BBM Channels.

Finally, BlackBerry didn't want to leave us all with just that. From there, they unveiled the BlackBerry Passport, previously known as the Windermere, and finally showed off the already announced BlackBerry Classic to the masses. I noted a while back that I was having a change of heart with the Passport in terms of its looks and I figured others would as well when they saw the final product. As it turns out, the REAL images of the Passport changed some people's minds and thoughts about the device. Not everyone, but overall, I'd say a lot who were against it based on the crappy leaked images might think differently now.

As for the Classic, well it IS a Classic device. To me it looks like a retro (but aggressively revamped) Bold 90xx series device and you know what? There's not a damn thing wrong with that as I see it. In fact, it lends some credit to 'My Classic BlackBerry' we posted about and I think it'll do well for BlackBerry. Out of all the devices, the Classic is the one I'm waiting for the most. I'll have a Passport as well come September when it's released but my 'I need a new BlackBerry' desires won't be fulfilled until November-ish when the Classic arrives.

I think that about sums everything up for today. Again, it was an awesome day for BlackBerry all around, so if you missed out on anything be sure to check the roundup of links I've gathered for you here.

To close this one out, we did indeed record a CrackBerry Podcast today so be sure to check out the video for that. We'll have the audio and usual podcast links for it posted tomorrow for you folks who prefer to just listen than watch or listen to the podcast on the go. It was pretty good despite me forgetting to change cameras for about a min or so at the start. Kinda funny. Feel free to make fun of me for it. I laughed myself when I realized it. We also touch on the whole 'no new all touch devices' thing if you were bothered by only seeing new keyboard devices shown off. That's it for now, Bla1ze...out!