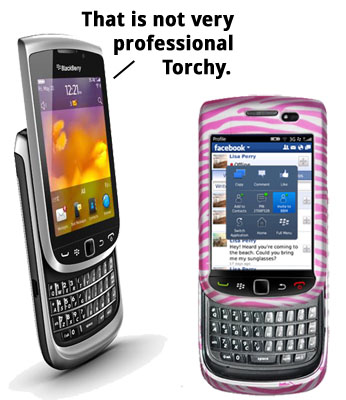 Recently we have seen tons of changes from RIM, their first tablet was released, executives have left, new phones have launched, and with all of it we are left wondering in which direction is RIM really going these days? The primary focus for RIM, the heart of their business, has always been Enterprise users, folks using their device for work purposes, to keep organized and crank out emails while on the go. Recently we have begun to see somewhat of a shift of focus from RIM, but not a full shift to consumer mode, instead sort of stuck in the middle in an odd place that no one really understands.

Recently Wall Street Journal published a piece about whether BlackBerry devices were intended for work or play, and it got me thinking even more on the topic. Do business users need a professional grade tablet so that they can play Need for Speed, or do consumers need an OS that is best optimized for BES users?

Up until just recently it was extremely obvious that RIM's focus was on BlackBerry Enterprise users, folks in the work environment that have their BlackBerry devices controlled by their BES Admins. We knew where the focus was, we constantly saw updated tools for enterprise users, hardware stayed relatively the same, focused on the keyboard for ease of use, and battery life, not too much on the frills and extras. Recently we have not seen this same focus, updates for BES items don't appear to be rolling in, the devices are receiving larger hardware updates, focusing on displays, processors, and cameras, which makes us wonder, do enterprise users really need that?

"There's an internal war going on around the marketing message. Even the guys at the top don't agree," one executive close to the company said at the time.

If the folks at RIM themselves are unsure of where their primary focus is, what does that do for us as end users? The BlackBerry PlayBook was promoted as a "professional grade tablet" yet it still lacks some basic functionality that any business user would need. Without a calendar, and email integration how does RIM expect for the device to be the laptop replacement that they had originally intended it to be? Sure it can be obtained by bridging your device to the PlayBook, but when on the go do you think that users really want to do this? The front facing camera is a great feature, but again, it's an extra that many business geared users would not need. We can accept that it was meant to be a consumer grade tablet that is great for gaming and web browsing, but why wouldn't it have been marketed as such?

When we look at the competition to the BlackBerry PlayBook, say for example the Amazon Kindle Fire, we know exactly their intentions for the device, and their marketing strategy. The device has yet to launch and we already know they intend for it to be focused on media and applications, along with some web browsing. The device is not geared to be a laptop replacement, instead a companion to take on the go to keep up on your favorite reading, along with having a little bit of extra fun.

With the release of the BlackBerry 7 devices we saw a Torch 9850/9860 get released which was clearly geared towards consumers, the large screen for displaying media while on the go, the lack of physical keyboard, and other features, but it was mixed in with the Bold 9900 devices which looked like a business type device. The message is confusing, they want to keep a professional edge in a consumer market, or they want to try to bring a consumer into the professional market for their device? We are just as unsure as they are at this point.

One former RIM executive says Mr. Lazaridis didn't want to compete in the cutthroat consumer-phone market, where margins were typically much smaller than in the corporate market. He also objected to cameras or music players, people close to RIM said, because he didn't think they would be favored by the government and military agencies that were some of RIM's biggest customers.

Remember BlackBerry Balance, and how it was/is going to unify work and personal devices without compromising any company information? In concept it seems like a great idea, users can carry one device and have their personal information as well as be connected to their corporate managed email, but did this ever take off? This again was aimed at making the device suitable for both a consumer and business use, but over the past years we have instead seen the growing trend of users separating their work and personal devices, instead of trying to combine them.

We all have seen that RIM is attempting to make big changes, they want to bring QNX to the mobile space, which they strongly feel will help set up the next decade of the BlackBerry experience. Could this thinking be what is putting RIM in the position they are in today? They want things to last so long term, instead of looking a year or two out, they are already hoping for 10 years of success from a new entry to the mobile space.

Does RIM need to regroup, refocus, and make that focus clear amongst the users, or is the somewhat of a double focus that they currently have and use enough for most? Should RIM make it clear whether they are going for a consumer or enterprise focus, and put all efforts towards that particular one, and that one only, or use some resources for each, but with a stronger focus on one?

A clear message and a designated focus from the two leaders could help a great deal with all the employees of RIM, as well as us end users. Knowing where the company envisions themselves going, and the steps they hope to take to get there would allow users, and investors alike to better understand the decisions that are being made, as well as put us in a position to give better feedback.

So RIM, which is it, business focus, have you finally given in to the consumer market, or do you want to continue trying to make one device and hope it pleases everyone?

More discussion in the forums