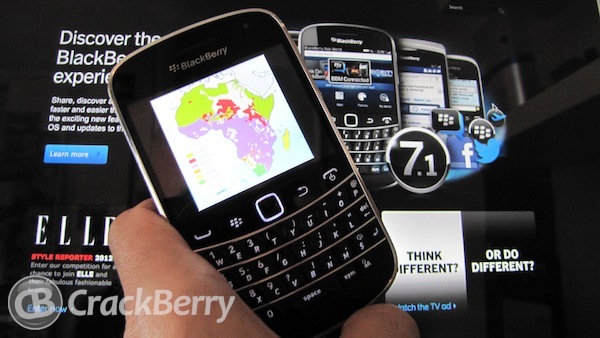 When it comes to where in the world Research in Motion is dominating the market, Africa more than likely doesn't spring to mind. However, things are certainly going in the right direction for the Canadian company as BlackBerry seems to be a way of life for millions of people there.

Here are some interesting BlackBerry facts:

The reason why BlackBerry seems to be so popular is pretty straight forward. Now having both pre-paid and post-paid BlackBerry Internet Service in Africa it's giving people affordable options to access all the great features the BlackBerry has to offer. Using services such as BBM, Facebook and Twitter means that borders and huge geographical areas are no longer an issue and the African BlackBerry subscribers are certainly making the most of that. An example of this is in Kenya where 40% of all Facebook logins are through a mobile device. In South Africa, BlackBerry was independently voted as the coolest youth brand for the second year in a row. In addition - the amount of BBM users in South Africa has increased by 47% over the past 18 months. Africa has actually now overtaken Latin America to be the second largest mobile market in the world. Asia still hold the number one spot, but with Africa increasing mobile subscribers by 30% per year on average over the last 10 years business is booming.

Taking a look at Nigeria as an example - things are really on the up. As well as the fantastic sales results, as featured above, RIM have now made the commitment to open an office in Nigeria for the first time - a true sign that BlackBerry is rocking the country! You may or may not be aware of the 'BlackBerry Babes' series of films which can be viewed on YouTube. They are an acquired taste but go to show that in Nigeria, BlackBerry is a very dominant brand and I'm told but a reliable source at RIM that the people there tend not to use the phrase 'BBM me' but instead 'ping me' is part of their normal vocabulary.

With OS 5, BlackBerry 6 and BlackBerry 7 smartphones being so popular across the region it only makes sense that the good people of Africa are also looking forward to the future and BlackBerry 10. The BB10 Jam World Tour has recently been over in South Africa and like in all the locations on the tour the excitement from developers was massive. The tour is also rocking Lagos this week as well as Kenya.

"BlackBerry continues to grow from strength to strength in Africa and we're proud of our number one position in this market. The exponential growth of smartphones on the Continent continues to create significant opportunities for RIM and our partners, especially among the mobile development community. Mobility is a growth driver in Africa, bringing the Internet, social networks and apps to millions of people that are creating new businesses, using apps to teach, or indeed in the case of the iAfya app, saving lives with critical information. We're proud to support the African development community to take advantage of this growth in Africa, but also reach over 78 million BlackBerry subscribers worldwide.

He adds, "With such large and loyal customer base, and a growing community of developer partners, Africa remains a strategic focus for our business and is a key part of our future growth as we innovate to bring BlackBerry 10 to market next year."

With so much negative press surrounding RIM recently, discovering how successful they now are in Africa really is a breath of fresh air. Plus with the anticipation of BlackBerry 10 I suspect RIM's dominating position in the smartphone market in Africa is here to stay.