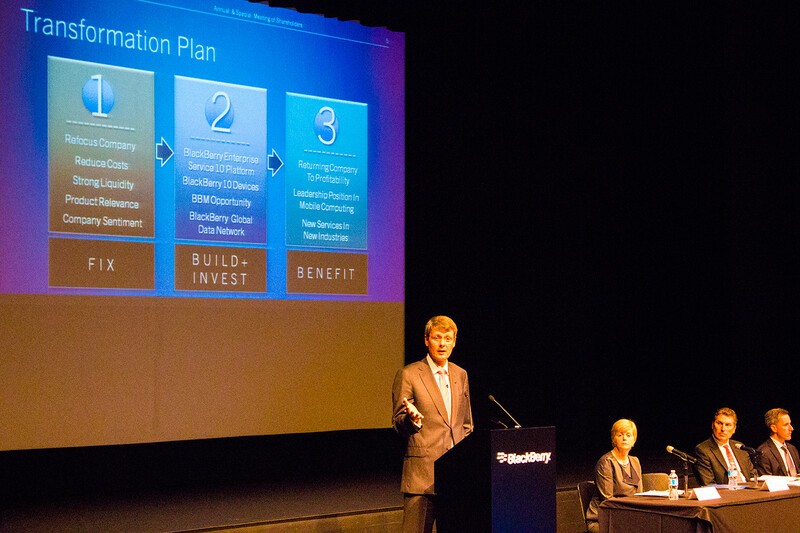 Following on our initial reaction, we’ve had a little bit of time to digest everything that’s been said at BlackBerry’s annual general meeting.

For me, the highlight was the three-phase schedule that Heins outlined. A lot of BlackBerry users are tired of waiting for this, that, or the other thing, and placing the platform’s progress on this kind of timeline provides a perspective we can work with. Otherwise, we’re all just waiting indefinitely with no end in sight.

The first phase involved refocusing the company, reducing costs, building strong liquidity, enhancing product relevance, and improving public sentiment about the company. To that end, they hired new execs, cut out middle management to reduce complexity, optimized their supply chain, and promoted a high performance culture through the company. Through their Cost Optimization and Resource Efficiency program, BlackBerry was able to save $1 billion in a year, and finished off with $2.9 billion cash in the bank, even after restructuring costs, versus $2 billion the year prior. In many ways, these were necessary steps for a strong foundation; the snazziest product in the world could fail with a counterproductive bureaucracy, or without any cash to market it.

"There is no guarantee for success. … I’m wearing a new suit, but it’s not made of kevlar" Thorsten Heins, BlackBerry CEO

The current phase is one of building and investing in products like BES, BBM, BlackBerry 10 devices, and the BlackBerry Global Data Network. This part includes maintaining cost efficiencies (yep, that means laying people off time to time), and limiting the product pipeline to six new devices at any time. However, later this year we’ll also see significant investment. In a media scrum following the AGM, one reporter asked if BlackBerry has, for all of its cash in the bank, been over-saving and under-spending. Thorsten’s response led us to believe that the next few quarters would see a lot of money put into pushing the company on all cylinders, though they’ll still be prudent about spending. One can assume this means significant spending in both marketing and product development.

The final phase is where everybody can start reaping the rewards, and shouldn’t be arriving for the next three or four quarters at least. At this point, the goal is to see new services in new industries (such as cars and machine-to-machine), leadership in mobile computing, and returning the company to profitability. This seems like a ways off for now, and Thorsten didn't elaborate too much on what the company would do when they reached the light at the end of the tunnel.

Even with all of the planning in the world, Heins has been perfectly frank about the reality of the situation: “There is no guarantee for success. … I’m wearing a new suit, but it’s not made of kevlar.” The best BlackBerry can do is work their collective ass off and stick to a sensible plan. What do you guys think of the plan? Was phase 1 successful in setting the stage for phase 2? How long do you think it will take before we hit phase 3?