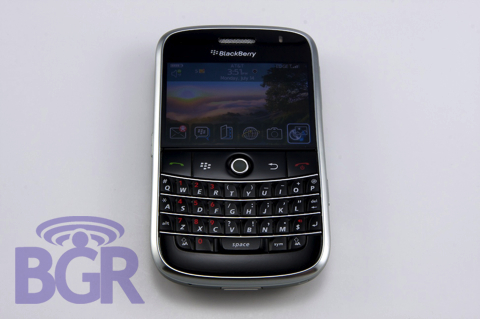 Wow does time ever fly. It's been over two months since we posted the web's first review of the BlackBerry 9000. We spilled the beans on the then yet-to-be-named or officially announced BlackBerry Bold, and as we warned on every post in our review series, the review was conducted on what was likely a pre-production device that would feature some further improvements come full release.

Today the Boy Genius put up a solid review of a full-production BlackBerry Bold. It's definitely worth a read and it's nice to have confirmation that some of the OS enhancements that we didn't see in the early version of OS4.6 we reviewed have made their way onto the device as promised, including some cool tweaks to BlackBerry Messenger and a much-improved web browser. What's less cool are some of the potential hardware issues that have been observed... while BG says the overall build quality of the device is solid ("There are no creaks with the device, and it seems sturdy as heck"), he noticed the Bold's display scratches easily. Don't worry, we'll keep a big supply of BlackBerry Bold Screen Protectors in stock at ShopCrackBerry.com. At least the performance of the display is second to none. According to BG, "It is the most vibrant, color-rich, sharp screen we’ve ever seen on a mobile device".

Take a gander at the full review (warning: BGR site is crawling today, so have patience) and be sure to report back with your thoughts and comments!