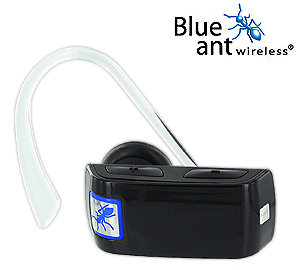 The BlueAnt Z9 Bluetooth headset blends innovation and serious good looks to create the device to beat in the competitive headset market. This Australian company’s design has garnered raves and awards and marks a new standard in headsets. Over-the-top raving? Maybe, but this unit is worth the plaudits it has received. Stylish design, innovative noise reduction, echo cancellation technology and dual microphones mark this as the gold standard of headset design.

I have been fortunate to both try and review a number of headsets over the last few months and have found a lot to be happy with most of them. So I was eager to see if the BlueAnt Z9 lived up to the hype. And I am pleased to say for the most part it does.

From a design perspective, the Z9 projects a clean, modern, simple profile. Nice graphic touches in a subtle package. The design won the 2007 US Consumer Electronics Show Innovations Design and Engineering Award. At just over 1.5 inches long, .6 inches wide and half and inch thick, it is certainly minimalist in scope. But it packs a lot of power for such a small device.

Simple packaging hides a gem of a headset

The Z9 sports a small silver square in the top section of the device which works as the Z9's multifunction button. It is easy to find and easy to press. The multifunction button also has a LED that flashes blue or red depending on the mode. Blue for in use and red for recharging. On the side of the devise, two volume buttons are also easy to locate and use. More on these later.

Ear bud and hook combine for a comfortable and stable fit

The Z9 comes with a bud that sits inside the ear and a stiff-ish ear hook that is surprisingly comfortable. That hook has an innovative hook that attaches it to the device firmly and allows for some considerable adjustment, including changing it to fit either ear. It also comes with two spare ear hooks of slightly different sizes. At just .35 oz or 11 grams it sits comfortably on the ear and is barely noticeable. I found wearing the Z9 for longer periods of time to be no problem. In fact, that comfort might be a problem in that you forget you are wearing it.

The charger port is at the top of the device which is ergonomically smart and easy to access and use.

Synching, as with most Bluetooth devices and the Curve, was a breeze and was quick to set up.

This leads me to my main concern with the BlueAnt Z9 – the one multifunction button. The unit has one button that is used for a variety of tasks from pairing mode, to on/off to resetting to ending calls. The trouble is that each of these functions requires some different click or hold time. The button works by pressing it and or the volume buttons in various combinations for different times. There are so many variations of this that the Z9 comes with a handy wallet guide…printed in 1 pixel high letters I might add…that explains each mode. It might take you some time to learn the different modes and how to activate them. Some modes are activated in conjunction with volume buttons which adds even more complexity. You would, in reality, only use a couple on a daily basis but the multi function button is a little problematic.

While figuring out the myriad combinations takes some getting used to actually using the headset for day to day functions was pretty easy. The buttons both the multifunction and the volume buttons are easy to feel and are easy to press and control.

Answering and ending calls was easy. The Z9 also has all the other features you would expect of an advanced headset such as call reject, last-number redial, voice-dialing and call mute.
Of course, the main question when any headset is being considered is sound quality and it is here where the BlueAnt excels.

The Z9 utilizes a couple of unique design functions that make for an incredibly clear sound both in terms of incoming calls and microphone clarity. The sound in the ear is crisp and clear with little or no distortion. The company has patents on its digital signal processor and voice isolation technologies, which reduces echo, wind noise and extraneous sounds. The unit features two microphones so the voice is picked up clearly. The BlueAnt Z9 has two settings a normal mode that can be used indoors and a Voice Isolation Max setting for car or outdoor settings. Both settings worked extremely well with the normal setting sounding very natural and clear and the advanced setting sounding slightly processed but, again, clear. Switching between the two is a matter of hitting the multifunction button during a call. People I spoke with said I sounded clear and normal (which is odd because I don’t in real life!). I tried it in my car, which in a Canadian winter is noisy with the heaters going and I could hear fine and people, while aware I was in a car, indicated I sounded clear.

OK, the babe on the box looks better wearing the Z9

Your BlackBerry’s own echo cancellation settings can interfere with the Z9’s technology. It is advised that if that occurs, access the Device Properties whilst connected to the Z9, scroll to Echo Control and turn it to off.

According to BlueAnt you can also pair up to three different phones and switch connections between them with a series of clicks. I didn’t try this although this would be a useful feature if you were moving from cell to home.

BlueAnt claims 5.5 hours of talk time and I believe that was pretty accurate and up to 200 hours of standby time.

The BlueAnt Z9 is a stylish and compact headset that packs a big punch. Smaller than jawbone headsets it is minimal and unobtrusive. In spite of its small size, the Z9 features a host of unique voice technology features that deliver crisp and clear sound both coming and going.

The Australian company has also positioned themselves with some aggressive pricing and the quality contained in the Z9 is comparable to much more expensive headsets and jawbones.


They say it's for science