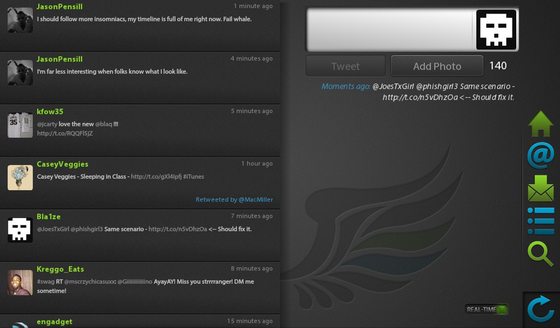 Since the v.1.1 update of Blaq for the PlayBook Kisai labs has been rather quiet about further updates or so it would seem. Truth is, Kisai labs has been beta testing release after release for a while now with each version getting significantly better. Now, the time has come for Blaq for PlayBook v1.5 to finally be released to BlackBerry App World and ultimately to the masses.

The update is huge and brings along with it plenty of changes and bug fixes. Seriously -- the change log is so big we have to put it past the break for you because if we don't itl will the whole front page. Jump on past to see the full change log or you can just head over to BlackBerry App World right now and grab the latest Blaq for PlayBook v1.5 update.

Phew! With all that out of the way, make sure you grab the latest update from BlackBerry App World. If you're not seeing it as of yet, just wait a little bit longer. It's appearing for most folks but a small handful of others are still waiting for it to show up. One other thing to note, is that if you currently have Blaq installed, make sure you delete it. Due to the vendor name changing you will end up with two different icons if the first version is still installed.

Download Blaq for PlayBook today from BlackBerry App World for only $1.99